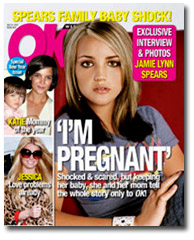 OK! magazine’s Jamie Lynn Spears pregnancy scoop propelled the magazine to sell more than a million copies at the newsstand for the first time.

The scoop—picked up by major news outlets around the world before the magazine hit newsstands—did not cannibalize sales.

"We literally had to go back to press to satisfy the demand," publisher Tom Morrissy wrote in an e-mail to advertisers. Morrissy projects total newsstand sales of 1.3 million, and a delivery of close to 1.7 million for the week. Morrissy says the magazine averaged 947,055 copies per issue during the second half of 2007, or a bonus delivery of 11 percent. OK!’s rate base is 850,000.

"Our experience has been the more pickups we get, the more sales we have," Morrissy told FOLIO: recently. "It’s not just the news we’re delivering [in print]—you’re going to want to spend time with the pictures."