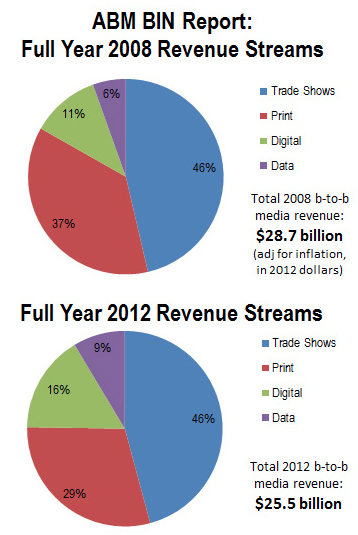 According to American Business Media’s latest Business Information Network report for full-year 2012, the b-to-b media and information industry is growing. From 2011 to 2012 b-to-b media revenue increased 3.4 percent from $24.66 billion to $25.49 billion.

While there was a positive gain, the percentage increase after inflation was actually a growth of 1.3 percent. Additionally, the industry is still far from where it was five years ago—total 2008 b-to-b media revenue was $28.7 billion (adjusted for inflation in 2012 dollars).

“Looking at the revenue stream growth form 2011 to 2012, not including an adjustment for inflation, digital advertising grew the fastest at 15.9 percent,” the report says. “Data grew 7.3 percent, events grew 4.4 percent and print advertising fell 4.8 percent (with) a negative growth rate.”

According to the report, only two vertical segments—agriculture and travel/events—showed an increase in both ad pages and total revenue in 2012. Another six of the 22 verticals included in the survey managed to grow print ad revenue even as total ad folio shrank. The remaining 14 verticals saw aggregate print ad page and revenue declines, which the report says is over a total of 6,044 business magazines currently published in the Unite States.