Next Issue Media Launches on the iPad
Catalog expands with the iOS app, non-consortium titles to be added in 2013. 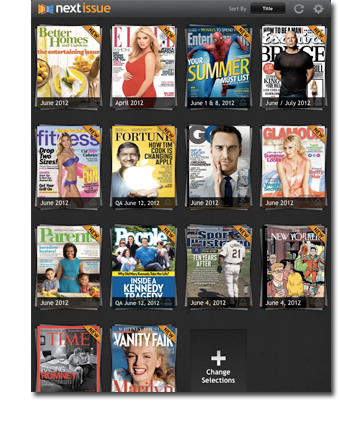 Next Issue Media announced today that its digital magazine newsstand app is now available on the iPad. Previously, Next Issue was only available on Android tablets.

The iPad plan is the same as the Android plan that it rolled out in April—unlimited access to available titles in two plans: a $10.00 per month basic and a $15.00 premium, which includes weekly pubs. Readers can also subscribe to individual titles at prices ranging from $1.99 to $9.99 per month or individual issues at $2.49 to $5.99 per issue.

Revenue from the plan is allocated to publishers based on engagement, the more time a reader spends with a title, the more revenue is shared with that publisher.

The app itself is also the same. Users set up an account at Next Issue’s website, purchase the plan, then go to Apple’s App Store to download the app to view all of their magazines within the single app interface.

Next Issue has added more titles since the Android launch and newly available on the iPad are Bon Appétit, Brides, Golf Digest, GQ, Self, Vogue and Wired, bringing the total available titles to 39 so far. Including the back catalog, there are approximately 350 issues available.

Next Issue Media CEO Morgan Guenther says they’ll double the size of the title catalog by the end of the year. For the second half of the year, adds Guenther, the plan calls for adding more consortium titles and a dedicated marketing campaign as the holidays approach. A market analysis around user engagement and preferences will also be conducted during that period.

Into 2013, Guenther says Next Issue will begin to add titles from outside the consortium, but they’ll likely adhere to the same high-volume, high-readership kinds of titles that Condé Nast, Hearst, Meredith, News Corp. and Time Inc. have.  Also next year, Guenther says new functionality such as search, social features and personalization will be added to the unlimited version of the plan.

Next Issue is placing its bet on the perceived ease of the unlimited access plan and the ability to use the single interface to manage and view multiple titles with a common navigation experience. "We think we’re a different experience," says Guenther. "Obviously the one-click iTunes experience is a great one, especially if you love a single title. But that’s one of the things we tried to solve—there’s a disconnect on every title in the newsstand. Every title is its own app, users have to learn how to interact with each of those. Next issue is its own standalone app."