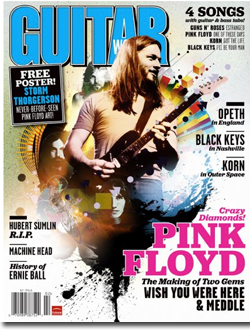 In an effort to scale back its exposure in the U.S. market, the U.S. division of Future plc has sold its Music Division, which includes Guitar World, Revolver and Guitar Aficionado and their related digital and live event assets, to New York-based NewBay Media for $3 million.

The deal significantly increases NewBay Media’s enthusiast portfolio, especially its guitar-related brands. It already has a music group that includes titles such as Bass Player, Guitar Player and Keyboard. The company also has a b-to-b division serving the broadcast/video, professional audio and A/V and electronics markets.

According to Future plc, revenues for the Music Group in fiscal 2011, which ended in September 2011, were about $13 million with a pre-tax loss of about $5.8 million.

In a statement Future plc CEO Mark Wood says, "The sale represents a big step forward in our strategy to streamline our U.S. business and return it to profitability by 2013. The merger of our mainstream U.S. operations and our UK business is on track, and we are making good progress in reducing costs."

Claiming only a 2 percent overlap in circulation, NewBay CEO Steve Palm says all the acquired titles will continue to be published rather than absorbed into NewBay’s existing portfolio."We have experience in this area of acquiring competing titles, what we call ‘co-opetition,’" Palm tells FOLIO:. "The notion is we’re going to continue to publish all the titles we’ve acquired and all the editorial and sales teams will remain separate and be responsible for making their own numbers and growing and creating value."

Palm says the titles went on the block in an auction process and NewBay jumped into the bidding about three months ago. The Jordan, Edmiston Group represented Future in the deal.

About 30 Future US employees will be transitioned to NewBay and Palm says they’re currently looking for office space to house the operations.

Future US, with its heavy dependence on the newsstand, has been struggling. The division, which accounts for almost 30 percent of overall revenues, reorganized its verticals in June and by July was quickly trying to transition to a digital focus.

According to 2011 year-end financials, the U.S. division lost 25 percent of its circulation revenue—newsstand sales plummeted 31 percent. Its total advertising revenue dropped 9 percent. Overall revenues for the group were down 13 percent to $62.4 million.

Customer publishing and digital advertising were bright spots, up 30 percent and 21 percent respectively, but not enough to overcome losses from the other segments.