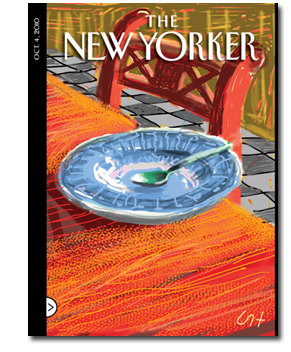 For a lot of publishers, creating an app for Apple’s iPad is like blazing a new trail—in more ways than one. Among them is Condé Nast’s The New Yorker, which debuted its app today. While it has had a Web site for nearly a decade and a digital edition for some time now the magazine, arguably, is still most regarded for its print product. And the editors know it.

In a note to readers, the editors say they are “at once delighted and a little bewildered” by the launch of the app. They also liken creating content for the iPad to producing TV shows after WWII, when so few people owned televisions. Here’s an excerpt from their note:

The New Yorker  will be available on the Apple iPad, on Mondays, wherever you happen to be. Print remains, by miles, our most popular form; unlike a Sunday newspaper, say, the print magazine is still a beautiful, portable, storable, slide-it-into-your-bag-able technology. This is not the first time we have brought The New Yorker to our readers digitally. Our Web site, newyorker.com, has been around, and evolving, for nine years; it’s also possible to subscribe to the magazine on electronic readers like Amazon’s Kindle and Barnes & Noble’s Nook. We even offer a digital edition, which includes a replica of every issue, going back to the first, in February, 1925.

This latest technology, however, provides the most material at the most advanced stage of digital speed and capacity. It has everything that is in the print edition and more: extra cartoons, extra photographs, videos, audio of writers and poets reading their work. This week’s inaugural tablet issue features an animated version of David Hockney’s cover, which he drew on an iPad. There is also a short film starring Jason Schwartzman and directed by Roman Coppola. It is billed as an instructional video to help you use the New Yorker application on the device, but we should caution that taking your iPad into the shower, as Schwartzman does, may void the warranty.

We’re at once delighted and a little bewildered about this latest digital development and our place in it: delighted because of the quality of what the tablet provides and the speed with which the magazine can be distributed, but bewildered, too, because we’d be liars if we said we knew precisely where technology will lead. These are early days. Right now, editing for the iPad feels similar to making television shows just after the Second World War, when less than one per cent of American households owned a television. And yet the general flow of things is clear: the digital revolution is already both long-standing and swift; there will be many more iPads sold; and competitors will inevitably follow. Some may even be roll-up-able. (Readers longing for digital scent strips will have to be patient.)

Truth is there still are a lot of unknowns surrounding the device and how publishers will be best able to leverage it. As the Wall Street Journal points out, publishers still aren’t able to sell subscriptions to their magazines via the iPad. "It is important to the New Yorker that we have offerings that allow long-term relationships with the consumers," Condé Nast President Bob Sauerberg says in the report. "Obviously, we don’t have that in place for the moment with Apple. We are very keen to do that."

While the waiting game continues (to find out when Apple will figure this out), publishers keep pushing their magazines on the iPad, selling individual copies and hoping the inherent value to readers and advertisers is worth it in the meantime.

For those of you who haven’t already downloaded the app, or having been dying to see a moustached Jason Schwartzman in the shower or pantsless on a couch, see below for the video unveiling: