New York is cutting its frequency by almost a third, dropping from 42 issues to 29 early next year, the company announced on Monday.

The impact will be obvious and felt quickly—they’ll save $3.5 million in production, according to reports, while revenue from print will also drop off—but long-term effects could stem from an accompanying shift in content strategy.

Most notably, New York is boosting its niche coverage as part of a brand "reinvention." Existing blogs the Cut (fashion) and Vulture (entertainment) will add staffers, with the former also getting a dedicated section in print. Two of the magazine’s other blogs, Grub Street (food) and Daily Intelligencer (news) will both take on a more national scope. They’ll also launch a new vertical, the Science of Us, focusing on human behavior.

While New York has always had an audience beyond city limits, the moves suggest it’s going for a more national appeal. That’s not the intent though, says Larry Burstein, the magazine’s publisher.

"We’ve never actively pursued a specific geographic strategy," he says. "I think the balance [between national and local content] will be maintained. It’s not like we’re going to take the magazine and build out a national circulation strategy."

Burstein notes that New York has a 70-30 local-national split in print, with a nationally-slanted 20-80* split online.

Widening the editorial scope may be more a function of catering to what readers want, regardless of where they’re located, but going national isn’t a new direction for the magazine.

New York‘s local audience had been reduced in recent years. Just over 70 percent of its readers are from the tri-state area (New York, New Jersey and Connecticut), down from more than 80 percent in the early 2000s, according to the Alliance for Audited Media. In raw circulation numbers, local readership has dropped 20 percent in the last decade, with overall circulation falling at less than half that rate (8 percent).

Those trends runs counter to what other major city magazines have experienced over the same period. Los Angeles, Philadelphia, Chicago, Washingtonian and Boston have each marginally increased their percentage of local readers while New York’s has fallen dramatically. 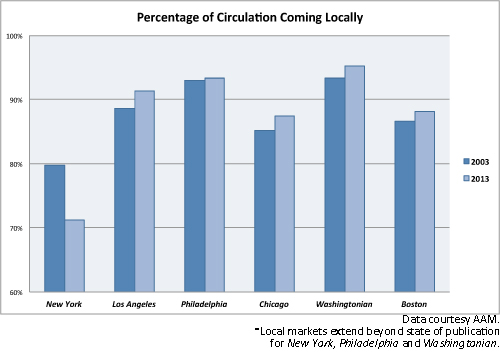 Those magazines don’t have the same profile as New York—for starters, they’re each published monthly with one-quarter to one-third the circulation size—but 10 years ago, the local-versus-national makeup of their audiences wasn’t far off. The gap is a lot wider now.

In a crowded national marketplace, emphasizing their respective cities has been the strategy for local publishers.

"All our consumer lifestyle magazines—and for the most part, all city titles—are experiencing increased revenue and readership due to editorial that reaches the soul of the cit[ies] we cover," says Todd Matherne, CEO of Renaissance Publishing, publisher of several city titles including New Orleans. "Timely service journalism with great food, history and local content is what drives our niche and keeps locals coming back. If you cover local, locals will read and advertisers will support."

Aside from the local editorial content that drives city publications—"best of" issues, along with nearby food and entertainment options, for example—ancillary opportunities like events are becoming a bigger factor for city titles. Almost 40 percent of the publishers in Folio‘s 2013 City and Regional Magazine Survey have launched an event in the last three years. They’ve become a key revenue driver for some titles like Los Angeles.

"A significant differentiator for us in our marketplace is our excellence in event activation," says Erika Anderson, publisher of Los Angeles. "Marketers turn to us to produce events that provide authentic and special experiences. National media entities based elsewhere struggle to do this well in L.A., and our growing events division is a reflection of the market opportunity."

New York currently has three locally-focused events and is planning to launch one or two more in 2014, but Burstein admits they’re still a small part of the overall business. Local ancillary opportunities probably won’t pay the bills for an operation like New York, but they’re trying them. Right now though, it’s about striking a balance between it’s two audiences.

*Editor’s note: An earlier version of this article incorrectly stated that the online local-national split was 80-20. The online audience is 80 percent national and 20 percent local.