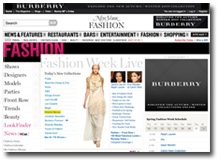 Not all the numbers have been tallied, but it looks like New York’s Fashion Week helped deliver a significant traffic punch for a number of magazine Web sites.

New York magazine, for instance, said its Web site saw more than 28 million page views the week of September 10 to 17, up 40 percent from Fashion Week last year. Average daily users for the period were around 300,000, up about 18 percent from last year. It was the site’s second-highest traffic period ever, behind the server-crashing photo slideshow of Lindsay Lohan as Marilyn Monroe from the February 2008 issue.

The site realized the biggest gains from its fashion blog, The Cut, which saw page views increase 179 percent from the comparable period in 2008. The site’s Model Manual—which allows users to search for models by age, nationality, notable features, etc.—saw page views spike by 71 percent over last year.

Nymag.com also was expected in September to pull in more online advertising dollars than any other month in the site’s 11-year history, the magazine said. As of September 18, revenue was up 18 percent from the same month last year.

Meanwhile, Condé Nast’s style.com, the online home of Vogue magazine, saw unique visitors jump more than 20 percent to roughly 1 million during its Fashion Week coverage this year compared to 826,000 last year. The site received 78.2 million page views this year, up more than 16 percent from 67.3 million in 2008.