With a New Mission and Strategy, SourceMedia Relaunches as Arizent
The company says the new branding represents a shift from the traditional B2B media model to a focus on advancing its communities. 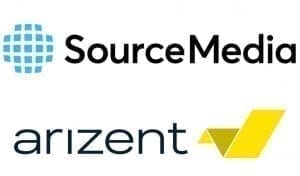 SourceMedia is now officially known as Arizent, the publisher of American Banker, Financial Planning and The Bond Buyer, among others, revealed Thursday.

More than simply a corporate rebranding, the B2B media and events firm says the change represents a new mission-driven direction and business model, in the works since CEO Gemma Postlethwaite arrived in 2018.

“It’s about integrating all of the different capabilities we have to be able to serve our customers better,” chief strategy officer Jeff Mancini told Folio:. “We’re starting to shift from this fundamental B2B media model to a business information company who focuses on advancing communities.”

A key element to the company’s strategy going forward will be deeper integration across its various platforms, which it believes will allow it to better serve its advertising partners and the professionals that engage with its 17 editorial brands and 20+ live events.

“In the past, we had custom content for marketers, we had editorial content, and then we had what was on stage at events. Those three content strategies tended to be fundamentally different in a company like ours,” Mancini continued. “It’s not that we still don’t have this notion of protecting the integrity of the journalists, but we’ve created other roles that are a little bit more horizontal within the company to create a firm connection between events and editorial and what we’re offering to our marketing services customers going forward.”

Leading the charge is a totally new suite of executives at the company—all of whom have been hired by Postlethwaite since she took over as CEO in mid-2018—including, among others: Mancini, who arrived in 2018 from Hudson Yards developer Related Companies, where he’d been CMO, as well as the more recent hires of Debra Mason (formerly CFO at Questex) as CFO, David Evans (the former head of event content strategy at Forrester) as chief content officer, former Hanley Wood CRO Dave Colford as chief customer officer, Lee Gavin (formerly of Thomson Reuters) as head of people and culture and Robyn Duda (formerly VP of brand strategy and experience design at events giant UBM) as head of experiences and networks.

On the client side, the hope is that the company will sell more integrated, longer-term programs spanning not only events and media but also across multiple brands. Editorially, it means greater flexibility to tackle broader challenges facing various sectors across the financial services space—diversity, culture change and technological transformation, to name a few.

“Historically, our differentiator was that we went really deep in the industries that we served in terms of news and information content,” Mancini says. “Now, we’re starting to think about how we can really advance these communities. It’s about helping them solve these challenges, not just publishing news about these challenges. Taking a more active role in that advancement is core to the mission.”

To support that mission, the company says it’s also investing in its research capabilities and launching a new peer network, “Arizent Leaders,” open to both men and women but explicitly focused on “creating tangible outcomes in gender equality across the financial services industry.”

Announced Thursday but slated for a wide launch on International Women’s Day in March, the network builds off of foundational franchises like American Banker‘s “Most Powerful Women in Banking” and recent editorial initiatives, such as a major, research-driven series on sexual harassment in finance that ran across several of its publications in 2018.

Mancini ticked off a series of challenges Arizent already hopes its Leaders network can help to address, including the pipeline of women coming into financial services, conscious or unconscious bias in promotions and pay, and the amount of women in board seats.

“We believe we can bring together partners to uncover big ideas, rally leaders around them, and then benchmark progress through research and an annual summit,” he said.

Mancini describes it as an evolution from reporting the news, which he cautions that the company isn’t walking away from—”we’re still good at it and it is still incredibly important”—to doubling down on more advanced cultural and technological changes and the ways in which they cut across industries.

“We’re trying to use the word relaunch, versus re-brand. We want to be a mission-driven company. It’s not a cosmetic exercise and it’s not just changing our name and the color scheme.”

That’s not to say there isn’t meaning behind the new name and look. “Arizent,” just as it sounds, is meant to evoke the notion of rising up—moving the financial industry forward while also helping individual professionals ascend in their careers. The yellow color scheme was intentional as well.

“We did an analysis of news and media brands, and nearly all of them fall into two color categories: blue and red,” Mancini said. “We wanted to be in a more emotional space, as a lot of what we’re trying to do is appeal to that mission side. Yellow is, psychologically, the most optimistic color you can choose. So it’s not a mistake that we landed on a non-traditional color and something super optimistic.”