New iPad on the Way
Price tag remains the same, but updates galore. 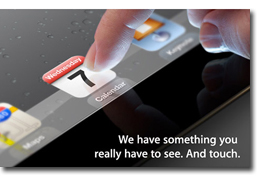 In a much-buzzed about announcement that was not a surprise to anyone with Internet access, Apple debuted the latest reincarnation of the iPad at a splashy event today at the Yerba Buena Center for the Arts in San Francisco. We think our invite [pictured, right] to the event must have gotten spammed, so we’re relying on the copious amount of live blogs saturating the Web to get the full Apple scoop. Here’s what we’ve learned so far.

• Name: The latest iPad is not called “the iPad 3”, or the “HD iPad” as speculated, but simply “the new iPad.”

• Dimensions: Mashable reports the new iPad will be 9.7 inches long and 9.4 millimeters thick.

• Presentation: The third version of the iPad has a 2048 x 1537-pixel “retina display.”
“It has 31 million pixels with a resolution of 2048 by 1536 pixels. That’s 1 million more pixels than an HD TV,” says marketing chief Phil Schiller said, according to AllThingsD.

• Color: The tablet will be available in black and white.

• Battery power: Similar to the iPad 2, the new iPad has 10 hours for regular use, and nine hours of 4G LTE use.

• Support: AllThingsD reports the new iPad is supported by an A5X chip “with quad-core graphics needed for new high-resolution display.”

• Networks: Coming to AT&T and Verizon. The new iPad will also act as a Personal Hotspot, allowing laptops, etc. to use its signal for Internet access.