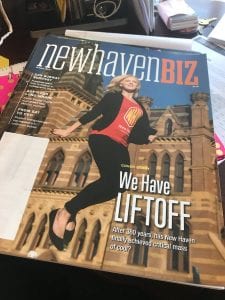 The magazine debuts in October and will carry a frequency of eight issues per year. It’s a free, controlled circulation magazine for an audience of business executives in New Haven, Fairfield, and Middlesex counties, including CEOs and senior-level managers. Its initial print run is 9,500, according to the publication’s media kit.

Currently, the business news site, which is a subset of the Hartford Business Journal and New England Business Media, offers a thrice-weekly e-newsletter, which launched last year, and will continue distributing content through that medium in addition to the new glossy.

According to a report by Markeshia Ricks for the New Haven Independent, New England Business Media CEO Peter Stanton, “likened the difference between the e-newsletter that business readers have been receiving since 2017 and the new magazine to tapas and a full course meal: One is for quick small bites of what’s now, the other for savoring.”

Ronni Rabin, senior account manager, also said in the New Haven Independent report that newsletter recipients have been wanting a print publication for some time and that “the magazine also will serve as a catalyst for special marketing events and experiential marketing.”

The magazine, which is filling a five-year-long gap of not having a regional b2b print publication, will focus on highlighting in-depth long-form form stories, including the October edition’s feature on the future of Long Wharf Theatre, and a profile on student entrepreneurs. Meanwhile breaking news will remain a feature for the newsletters and website, according to Rick’s report.