UPDATE: National Geographic Kills Print Edition of Adventure
Magazine brand to live on as part of a ‘multiplatform model.’ 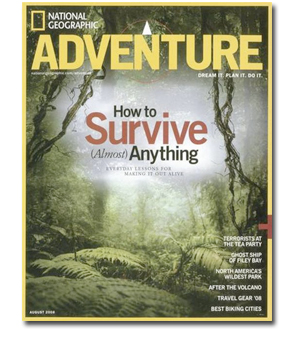 After quietly exploring options for a sale, the National Geographic Society has decided to shutter the print edition of its Adventure spinoff title. The announcement was made today to staff.

“We’re tremendously proud of what [editor-in-chief] John Rasmus and his team have accomplished over the last 10 years,” National Geographic Magazine Group president John Griffin said in statement e-mailed to FOLIO:.  “They have consistently delivered award winning editorial to an enthusiastic audience of readers and advertisers. But given the current advertising environment and the opportunities we see in emerging digital platforms, we think the time is right to transition the Adventure brand.”

Seventeen layoffs were associated with the closing, a spokesperson said. The majority of the cuts came from editorial and production.

The Adventure brand will live on, the group said, in a “multi-platform model,” including books, e-magazines, mobile applications and a Web site. It will continue to produce the National Geographic Adventure Awards.

UPDATE: Not far behind Adventure in terms of ad page losses is National Geographic Traveler, which saw a nearly 40 percent decrease through the third quarter. Despite those losses, a spokesperson said National Geographic is "fully committed to Traveler, saying the magazine is still part of the group’s "DNA."

The flagship National Geographic is down 21 percent in pages while Kids has held steady, growing roughly 1
percent, according to PIB.