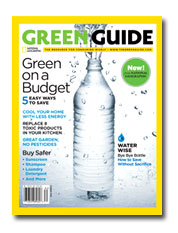 A source close the magazine said the company is “discontinuing” the magazine but "may publish some print specials.” Instead, the focus will be on the Green Guide’s Web site, which launched in 2002.

It is unclear how many employees will be affected by the shift, or when the decision will be announced. (The masthead lists 16 staffers.) A spokesperson for National Geographic declined to comment on the change.

Touted as a magazine "written for general consumers, not for enviromaniacs,” the Green Guide carried a rate base of 100,000 and a $4.95 newsstand price, with distribution at Barnes & Noble, Whole Foods Markets and Hudson News. The magazine was printed on Forest Stewardship Council-certified paper.

National Geographic also produced a digital edition of the magazine, which is expected to be published through at least next fall. A mobile version of the guide is slated to roll out this month.