Moving from ‘Magazines’ to ‘Media’
MagRadar rebrands and discovers more about multiplatform in the process.

Any company that’s grown up targeting the magazine business the past few decades has no doubt had to come to terms with the new media landscape, particularly if its name is directly tied to print media.

Heck, we’re mulling through this now with FOLIO:, which is still "The Magazine for Magazine Management."

The main associations that serve the industry have already rebranded, as did ABC recently.

MagazineRadar, a data service that has helped magazine publishers know more about brands and the people that buy them, got caught in the same dilemma. It’s just rebranded itself as MediaRadar. Not a particularly big stretch, but it’s definitely symbolic of the changes happening all around us.

As an example, the company has been tracking just over one million brands that are buying online ads and in the process of doing so has uncovered some interesting patterns in how those digital buys overlap, or don’t overlap, print.

"The number-one discovery was the size of the online ad market is much larger than we understood," says co-founder Todd Krizelman. "If we just look on the consumer side of MPA titles, out of the people who buy MPA magazines, only a third of those are showing up on [the brand’s] website. We’re 20 years into the web and only one-third are buying on the same set of websites."

Surprisingly, there appears to be very little overlap, or integrated sales, going on.

In the third quarter of 2012, for example, MediaRadar found that about 9,000 brands advertised in the MPA-member consumer magazines it tracks. There were 12,000 brands that advertised on those titles’ websites. But only 3,000 were integrated buys—leaving about 9,000 advertisers that were only buying digital with those brands.

There are some brands that have done particularly well through integrated buys, but that discrepancy is one reason digital-only publishers have done as well as they have, says Krizelman. "One of the reasons they’ve been successful is not that they’ve stolen clients, but exploited the knowledge that there’s thousands of advertisers that buy only online." 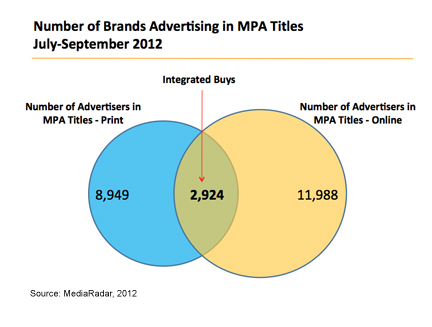