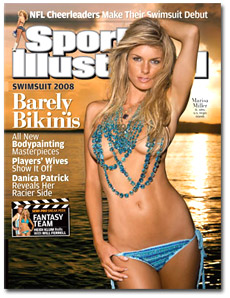 If you thought you’d heard it all in terms of the backlash surrounding Sports Illustrated’s annual swimsuit issue—subscribers, Time Inc. staffers—think again.

Chimpanzee Sanctuary Northwest, a Washington state-based organization that supports chimpanzees "discarded from the entertainment and biomedical testing industries," has organized a letter-writing campaign protesting the magazine’s use of animals in its swimsuit pictorials.

In a letter sent to Sports Illustrated, Julia Gallucci of Chimpanzee Sanctuary criticized the magazine’s use of a macaque and a bear on location at a Russian vodka distillery. "I wanted to let you know that exotic animals typically endure excessively brutal training methods at the hands of their trainers, who dominate the animals and force them to perform unnatural behaviors for the camera," Gallucci wrote. "Please make the responsible decision never to exploit exotic animals in your publication again."

"We have tremendous respect and admiration for those who share our passion for the protection of animal rights," reads a statement submitted to FOLIO: by Sports Illustrated. "We are rigorous in our adherence to the laws protecting the rights of animals and continue to place close scrutiny the ways in which we feature the beauty of the animal kingdom."

SWIMSUIT AT THE NEWSSTAND