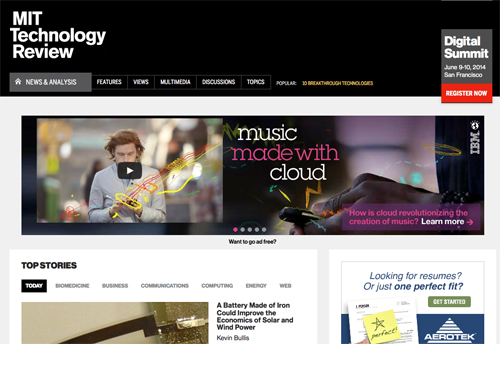 The program soft launched early this year, with MIT Technology Review gradually introducing marketing "interruptions" notifying readers that the site was approaching a new access model. By the end of February, the group flipped to the tiered model, but did not market it broadly.

The Insider plan at $29.95 per year includes a one-year subscription to either the print magazine or the digital magazine, special content on the website, limited archive access and special event and product discounts.

The $79.95 per year Insider Plus combines a print and digital subscription, the third volume of Technology Review's Science Fiction Anthology, full archive access, full-text RSS feeds and, if the subscriber chooses, an ad-free website.

Broadly, the plan is aiming at a membership model. The brand isn't quite there yet, but it's a recognition that readers want to engage on multiple levels.

"People are engaging in so many different ways," says vice president of marketing Bruce Rhodes. "Reading a magazine on just a mobile device or computer screen is not going to cut it for us."

The ad-free viewing element is an experiment, says Rhodes, adding that he's not convinced that it's a benefit that will drive subscribers into the higher priced tiers.

Subscribers can opt out of the ads by checking that option in their preferences dashboard. "All along we wanted to test this out and get into a feedback loop with our customers. We'll survey them hard on the ad-free option, asking whether they joined for that or different reasons. It's definitely a slippery slope and we don't want to alienate our advertisers, but we've also developed other ways to engage with our audience than just banner ads."

The brand has been trying to solve the paid content formula for years—very publicly ditching early attempts at paywall models and then edging toward membership as part of a new digital-first strategy embarked on in 2012.

While Rhodes says the current plan is by no means a membership model, there remains the possibility of adding more engagement features to those tiers—access to editors, sneak peeks at new products, and so on.