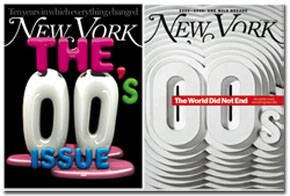 Some publishers are benefiting from a different kind of cover story: the one that tells how the current cover was designed, why it made the cut—and which designs didn’t.

Many publishers aren’t commissioning just one cover per issue anymore. Instead, they invite a mix of designers to take a stab at just one cover, with the intention of publishing the best work while giving the rest air time online or in the pages of the magazine.

Some, like Latina, have benefited financially from it. Its November issue, featuring a split cover run, generated a 6 percent increase in additional issue revenue based on new advertisers. The runner up design, which was originally supposed to appear inside the magazine, ended up becoming an alternate cover. Each designer received an equal amount of front-of-book space to discuss design inspiration.

Others, like East West, have used cover design as an audience development tool. For the relaunch in October, the Asian culture-focused title solicited original artwork submissions from readers, asking them to interpret “the meaning of East West and the merging of cultures.” The he winning design was featured on the cover of the October/November issue, which also included a profile of the designer.

Then there’s New York magazine, which recently asked several graphic designers from around the world to illustrate "00s" (the 2000’s) for its December 14 issue cover. (The cover story is based on the decade drawing to a close.) The magazine opted for two cover designs [pictured]—one for newsstand and one for subscribers—as well as one featured on the magazine page opening the "aughts" section. Those that made it onto the cover, as well as the remaining six that didn’t make the cut, are featured on the table of contents page and make up a slideshow at nymag.com. It shows the final versions as well as the production and design steps.

In terms of why they executed the multi-design cover: “the topic was so huge and encompassing and exciting; also, the simplicity of the three characters, 00s, is a dream for graphic designers to explore visually. It also felt like a magazine ‘event,’ exciting for the reader to see so many versions, and worthy of this special issue about the decade,” New York design director Chris Dixon said in an e-mail to FOLIO:.

A New York spokesperson said that traffic numbers for the 00s slideshow haven’t been tallied yet, but in general, the traffic to its cover slideshows can vary widely. Nymag.com, which sees about 55 million page views per month, has created cover slideshows that command just several thousand page views, to others, like its Eliot Spitzer cover slideshow, that see close to 50,000 page views.

For those of us in publishing, particularly creative, it’s always a thrill to see some of the ideas that never made it onto the cover, as well as the process behind those that did (if you don’t believe me, check out FOLIO:’s monthly FaceUp column). But are consumers interested in these cover design outtakes?

As we see more editorial focusing on the “behind the scenes” aspect of magazine design, I wonder if it’s losing its punch as an “event” and if it instead is merely becoming a way for publishers to bolster online content and bulk up front of book editorial.