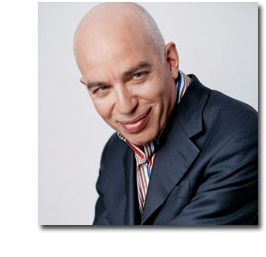 Wolff [pictured] is known for his aggressive take on the media business and it appears that this sensibility was key to his appointment and one he will continue to exploit. Beckman told the New York Times that Wolff is “…controversial. Which is good. If you want to make an omelet you have to break some eggs.”

Likewise, Wolff said of his hire that he plans on having a lot of fun covering the media business and that he wants to "make some trouble."

Trouble or not, e5 has at the very least secured impressive media buzz from the Min and Wolff appointments, not to mention Beckman himself, who left a president and chief executive post at Condé Nast’s Fairchild Fashion Group in January to head up e5.

e5 Global Media, backed by Pluribus Capital Management and Guggenheim Partners, bought the Adweek Media Group titles, along with The Hollywood Reporter and four other brands from Nielsen Business Media in late 2009.