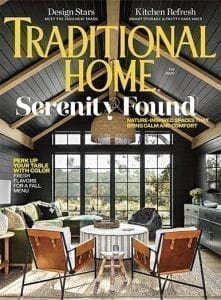 A year after converting Traditional Home from a primarily advertising-funded model to a more consumer-driven, newsstand-only publication—and cutting its frequency, circulation and most of its editorial staff in the process—Meredith Corp. announced Monday that it is once again selling subscriptions to the magazine.

Starting with its Fall issue, out later this month, readers will have the option of purchasing $20 annual subscriptions to the now-quarterly shelter magazine, which carries a relatively high, $12.99 cover price on newsstands.

The shift represents an increasingly familiar strategy for Meredith, similar to the one it’s been executing at Coastal Living since last November: reducing dependence on advertising revenue by producing fewer issues and copies of each issue, but marketing them as premium quality “bookazines” at a $10–$15 price point, distributed through a combination of newsstand sales and direct-sold subscriptions.

It’s a stark contrast from the more traditional, ad-driven models applied to the company’s largest titles, such as Better Homes & Gardens or Shape, which carry rate bases in the millions but can be subscribed to for less than $1 per issue.

“It’s really kind of a financially driven analysis to figure out when the model flips for a specific brand from being more advertising-driven to more consumer-driven, and we’re looking at that over time,” Meredith president and CEO Tom Harty explained on an earnings call late last year.

Since shifting Traditional Home to a newsstand-only model last summer, Meredith has been printing 350,000 copies of each issue, according to a spokeswoman, who said the company’s goal moving forward will be to achieve a rate base of 150,000 to 200,000 within the next 12 to 18 months.

“Offering consumers home delivery is a logical next step based on the overwhelmingly positive response of readers and the success of Cooking Light and Coastal Living‘s pivot to Meredith’s consumer-driven model,” said Meredith Magazines president Doug Olson in a statement Monday. “It’s a profitable and innovative way for us to deliver our desired print brands like Traditional Home to our passionate and loyal readers.”

In addition to Coastal Living and Cooking Light, Meredith has applied a similar model to most of its new magazine launches in recent years, including this year’s Reveal and Sweet July, as well as The Magnolia Journal, which debuted in 2016 with an initial print run of 400,000 and now sells an average of 1.2 million copies of each quarterly issue.

To commemorate the shift, Meredith says it’s also rebranding its Special Interest Media division—which produces numerous one-off SIPs each year as well as all of the aforementioned consumer-revenue-focused titles—to Meredith Premium Publications, a name which the company says “emphasizes the unit’s focus and commitment to producing the highest-quality, premium magazines from a content and packaging perspective.”