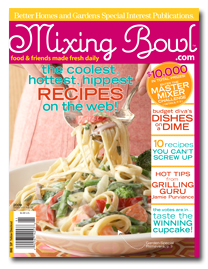 Magazine publishers have spent the last few years struggling to extend their brands—even those that have a big presence online—into the social media space, where Facebook and Twitter rule.

The company sees Mixing Bowl magazine as a “companion publication” to Mixingbowl.com, which Meredith launched in January as part of its women’s digital network. (The site has roughly 16,000 registered members now, with 300 to 400 signing up per day, according to Jeff Myers, vice president and general manager of Meredith’s Special Interest Media division.)

The publication will be available in major supermarkets and bookstores nationwide starting today, carrying an initial distribution of 260,000 and a $4.99 cover price. A second issue is planned for January; its future after that is yet to be determined, Myers said.

“We saw this as a unique newsstand opportunity, as well as a tradition advertising vehicle,” Myers said, noting, however, that Meredith did not attempt to sell advertisers into the launch issue. “We saw it as something that would serve the community and enhance engagement (first).”

Sections include typical food magazine fare (“10 Recipes You Can’t
Screw Up!”) alongside profiles of Mixing Bowl users (“Meet the
Members”) and, of course, their recipes.

Myers said that while the company will use traditional print magazine metrics—like profitability—to determine how far they’ll take Mixing Bowl, they realize there is “value (in the magazine) beyond print.” He declined to reveal exactly what those traditional benchmarks would be.

Meredith, meanwhile, is billing it as “the first-ever print extension of a social media brand,” although the accuracy of that statement is up for debate. In 2004, 8020, a company heralded for its community-based editorial model, launched JPG, a magazine for photo enthusiasts, as an extension of a vibrant online community.

But in January, 8020 was on the brink of folding and announced it would shut down; investors, however, materialized, and the magazine was expected to relaunch this year.