Meredith Finalizes Acquisition of Every Day With Rachael Ray
First issue under Meredith banner will be Feb. 2012. 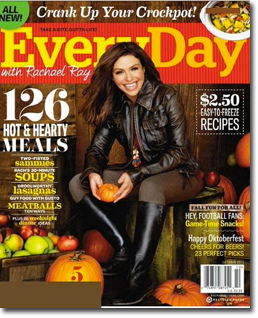 Earlier this month, Meredith Corporation announced that it would be buying the print and digital assets of Every Day with Rachael Ray from Reader’s Digest Association. Today, Meredith Corp. and Reader’s Digest Association have confirmed that they have finalized an agreement that fortifies Every Day with Rachael Ray magazine and its digital assets to Meredith.

The transaction will add to the development of Meredith’s Food category, which comprised of the launch of Recipe.com and the acquirement of EatingWell Media Group earlier this year.

The magazine is published 10 times a year with a 7.4 million audience and 1.7 million rate base. Every Day with Rachael Ray’s first issue under Meredith’s banner will be February 2012.

Meredith initially said it had reached an agreement in principle to acquire the assets of Every Day With Rachael Ray on October 1, however Dan Lagani, president of RDA North America, said that calling it a done deal at the time was “premature.”

Reader’s Digest put Every Day With Rachael Ray up for sale earlier this month as part of a series of steps to focus resources on its "master brands", including Reader’s Digest, Taste of Home and The Family Handyman.

Once a top performer on the print side for RDA, Every Day With Rachael Ray is down 21 percent in ad pages for the first nine months of 2011, according to Publishers Information Bureau. Meanwhile, Reader’s Digest was up 10.7 percent in ad pages, Taste of Home was up 2.7 percent and The Family Handyman was up 11.1 percent for the same period, per PIB.

Peggy Northrop stepped down from her position as global editor-in-chief of Reader’s Digest. She’ll take on an advisory role as international editor-at-large. Last year, Northrop led Reader’s Digest in a "return to its roots" as a curator of content for its family-centric consumers.

In September, Robert Guth, former CEO of telecommunications company TelCove, was named president and CEO of RDA, becoming the third person this year to hold those titles, following the departure of longtime CEO Mary Berner in April and former CFO Tom Williams, who replaced Berner. In July, The Wall Street Journal reported that RDA was up fro sale with an asking price of $1 billion.