Meredith Cuts Salaries, Expands Ad Guarantee to Make Up for Revenue Decline
Approximately 3,000 employees will see pay cuts through September, ranging from 15% up to 40% for top executives. 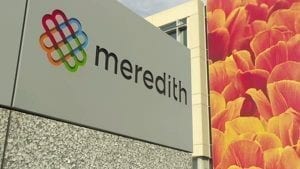 Facing what it called “a significant decline in advertising revenues” as a result of the COVID-19 pandemic, Meredith Corp. says it’s implementing sweeping pay cuts across 60% of its approximately 5,000 employees, suspending quarterly dividends and withdrawing the 2020 fiscal outlook communicated to investors on its most recent earnings call in early February.

Effective May 4 and continuing through early September, 45% of the company (approximately 2,250 staffers) will have their pay reduced by 15%, while an additional group representing about 750 of the company’s highest-paid employees will see pay cuts starting at 20% and ranging up to 40% for CEO Tom Harty and the Board of Directors. Salaries for the remaining 2,000 or so employees will not be impacted.

Additionally, Meredith says those employees whose salaries are being reduced will be given one day of unpaid leave per week until September 4. Effective immediately, the company is also implementing a wage, salary and hiring freeze as well as “a significant reduction in temporary and freelance usage.”

“The COVID-19 crisis has created an extremely challenging business environment, including significant advertising campaign cancellations and delays,” said Harty in a statement. “While our financial position is strong, given the impact on advertising—which represents approximately half of our revenue mix—we are proactively taking aggressive actions to strengthen our liquidity and enhance our financial flexibility in the near-term to effectively navigate the current environment.”

Monday’s announcement illustrates just how rapidly the pandemic has impacted ad-supported media, despite huge audience surges (digital traffic across its portfolio is up 40% year-over-year in April, Meredith says). As recently as February, Meredith reported on an earnings call that, at long last, growth in digital advertising revenue was fully offsetting declines on the print side.

In a phone conversation last Thursday, Meredith Magazines president Doug Olson acknowledged the effects of the pandemic and subsequent business disruptions on the company’s advertising revenue.

“We think we’re holding up better than most, but at the same time everyone is clearly impacted by all of this,” Olson tells Folio:.

Since the outbreak of the pandemic, Olson says, Meredith’s advertising partners have generally had one of two responses. Some went completely dark, viewing their products or services as non-essential and believing they’d have difficulties gaining consumers’ attention.

“We think that’s a mistake, but we respect the decision,” Olson continues. “The rest of the people who still had budgets and still wanted to reach the consumer were really struggling with their messaging. The common theme that we started to see in all of this was that advertisers wanted to make sure their advertising was working. Even more so than normal, is it money well spent? We kept hearing that over and over again.”

In response, Meredith has rolled out an expanded version of its “Sales Guarantee” program, which promises a measurable sales lift for advertisers who meet a minimum spending level in its print and digital properties.

Hoping to replicate the success of that initiative (in the nine years since it debuted, Olson says, Meredith has executed over 200 campaigns and never had to refund a client), the company is now adding an “Audience Action Guarantee” to its repertoire, which promises clients that a pre-determined number of consumers will take some form of action as a result of ad campaigns in the pages of the company’s weekly or monthly magazines.

Verified by MRI-Simmons’ Starch AdMeasure consumer surveys and determined based on a client’s specific goals, examples of actions could include a reader clipping an ad to save it for later, pursuing more information on a product, visiting a website, gaining a more favorable opinion of a product or recommending a product to someone else.

“This is not guaranteeing sales; it’s guaranteeing some kind of action around advertising,” Olson says. “Chances are if there’s an action, there’s more sales, but they don’t have to wait two to three months to find out of it’s working or not. We tried to come up with something that was a little more straightforward, took a little less advertising commitment, and was something we could measure in weeks. It’s simple, it’s very measurable, and it’s something that the advertising community was asking for.”

To qualify, advertisers need to commit to a minimum of five ad pages between May and December in any of Meredith’s titles that are tracked by MRI-Simmons’ Starch AdMeasure study, which include Better Homes & Gardens, InStyle, People and Real Simple, among several others. Quarterly titles not tracked by Starch AdMeasure, such as The Magnolia Journal or Ayesha Curry’s forthcoming magazine, Sweet July, are not included in the program.

“Quite honestly, this is something a competitor could do, too,” Olson adds. “It’s not using proprietary information; it’s just putting together stuff that was out there and that people already trusted and just doing it in a more cohesive way so people can get comfortable that their ad dollars are working.”

Elsewhere in the business update issued Monday, Meredith noted that sales of subscriptions, which account for 95% of its overall print magazine sales, “have been strong, with renewal orders from the most recent campaign performing above expectations.”

Meredith is expected to hold its next quarterly earnings call in early-to-mid May.