Men’s Fitness will expand its Ultimate Athlete Games according to an announcement made Tuesday. 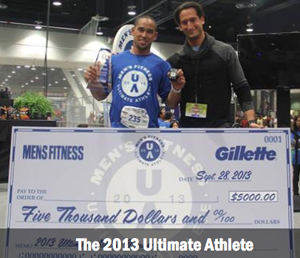 The “definitive test of fitness” created by editors and experts at the American Media Inc. title will hold multiple events at the Sandwich Fairgrounds near Chicago in July and Tuxedo Park, NY in October to test competitors’ strength, speed and agility.

In 2013, the event took place during Olympia Weekend at the Last Vegas convention Center where hundreds of participants competed for a $5,000 grand prize.

This year, event organizers will name one victor, crowning him or her with the title “America’s Ultimate Athlete,” a cash prize of $2,500 and a feature spread in an upcoming issue of Men’s Fitness magazine, which has a reach of 8.6 million readers.

“Men’s Fitness has established itself as the go-to brand for driven and successful men who are constantly looking for the new measure of success,” says Patrick Connors, Men’s Fitness vice president and publisher, in a statement.

The magazine worked closely with the Colorado-based outdoor adventure company Adventure Fit Inc. to create the sporting contest. The Ultimate Athlete Games feature three timed “challenge courses” one-quarter mile to one-mile in length consisting of up to 10 obstacles each. In addition to the Ultimate Athlete crown, participants are also vying for prizes for best female, best male and best team.

“The Ultimate Athlete Games answers the question that so many athletes want to know: How do I stack up?” says Adventure Fit president Josh Kravetz in a statement. “It will be great for male and female athletes of all sports to see how they fare against the course, as well as each other, to see who truly is the Ultimate Athlete.”