McGraw-Hill Cuts 270 Jobs
More than half come from publishing division; income down 20 percent. 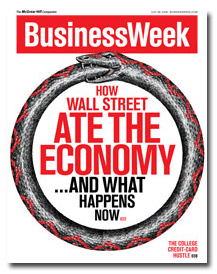 As part of its third quarter financial statement, BusinessWeek publisher the McGraw-Hill Companies today said it eliminated 270 jobs company-wide in an effort to “contain costs and mitigate the impact of the current and expected future economic conditions.” More than half of the cuts—140—come from its media and information division.

Year-to-date, McGraw-Hill has reduced its overall workforce by 670 positions, including 290 in its financial services division and 240 from its education division.

A McGraw-Hill spokesperson declined to say how many of the cuts come from BusinessWeek. The overall reductions represent about 1 percent of the company’s global workforce, he said.

Late last year, the company cut 611 jobs as part of a major corporate restructuring. Nearly 20 percent of those—114 jobs—came from the company’s information and media division.

McGraw-Hill’s third quarter income fell nearly 14 percent to $390.2 million compared to $452 million in income during the same period in 2007. That includes a pre-tax charge of $23.4 million ($14.6 million after tax) associated with the workforce reduction.

While accounting for significantly less revenue than the company’s other segments, McGraw-Hill’s media and information division was the one bright spot, posting $776 million year-to-date, up 5.1 percent from the same period in 2007.

With the down U.S. credit market, McGraw-Hill sustained its biggest losses in its financial segment, with revenue down 12 percent to $2.03 billion. The McGraw-Hill education unit reported $2.13 billion in revenue, down 1 percent.