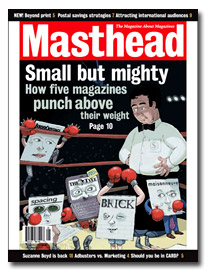 Losing money and unable to find a buyer, Masthead, the magazine that covers the Canadian magazine industry, has been shuttered. The November/December issue, which is in production, will be its last.

After more than two decades in print, Mississauga, Canada-based publisher North Island Publishing decided to close the print magazine and its companion Web site, indicating that the business “has not been financially viable for several years,” and that “structural changes in the market have created even more challenges,” the company said this week.

“We’ve tried several publishing models over the years but none worked well enough to keep the magazine going,” North Island president Alexander Donald said in a statement. The company put the business up for sale but was unable to find a buyer, he said.

Two full-time employees were laid off as part of the foldings. Part-time staffers will be reassigned to North Island’s other properties, the company said.