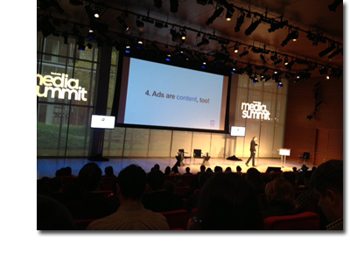 New York—With social and mobile traffic gaining greater shares of web engagement, Mashable CEO Peter Cashmore took the opportunity at the Mashable Media Summit here to preview his site’s redesign and relaunch scheduled for Tuesday, which specifically leverages those two platforms. In front of close to 300 attendees at the Times Center, Cashmore described a new site that will feature a responsive design, an emphasis on native advertising and a content layout and flow that’s driven primarily by social activity.

To emphasize the growing importance of the mobile platform, and its diversity, Cashmore said the site in October attracted readers using 2,800 unique devices—with 30 percent of readers coming from mobile. This was a primary driver behind Mashable’s decision to go with a responsive design emphasis over an app approach. "What we’re doing is if people are consuming on the mobile web we need to make our mobile site amazing and if they’re coming from Twitter and Facebook, we need to make that experience a good one too."

As for social and its impact on traffic, Cashmore noted that it’s now social first and SEO second. "We will always look for ways to influence sharing versus cramming stories with keywords," he said.

The new site will features a social "start page," which organizes content in a column layout from left to right based on social activity around a particular article. And the content itself is optimized for sharing. For example, new content starts in the left column. As it trends higher, it moves to the center, and then finally to the right "What’s Hot" column as the trending peaks. The home page is set up and displayed according to what people are interacting with.

Further, articles include sharable elements, which Cashmore called "microcontent." Image, video and text elements are individually sharable. This decision was driven by the fact that images are shared eight times more than links on Mashable. Accordingly, articles will now have high-quality images associated with the, curated and selected by a new full-time image editor who will also manage licensing deals with the images.

Advertising will now be primarily "native," or custom ads, rather than display. These formats, said Cashmore, are more content-oriented. As a result, they’ll be included in the standard content stream, labeled as ads, and formatted with the same sharable qualities. Regular display ads, noted Cashmore, are not shareable. Specific new formats will include in-stream display units, native in-stream units, storytelling units and brand lift units (content that’s created by the advertiser, but is not specifically about a brand).

"Packaging," said Cashmore, will be a key strategy going forward. "If your website isn’t as fun on these devices, [readers] might go elsewhere, which is why packaging is going to be big in 2013."

In a later session called "Thinking Outside the App" featuring FT.com managing director Rob Grimshaw, New York Media CTO Larry Chevres, and Google VP, Americas partner business solutions Bonita Stewart, conversation turned to the native versus mobile web decision. While panelists, except for Grimshaw, came down on both sides, mobile was universally touted as a major strategic influence. "What we as publishers need to do is look at what technology companies are investing in. That is where the world is going," said Grimshaw. "To be mobile-first means actually moving big chunks of your business and organizational efforts to creting news on mobile devices. We’re trying to do that very rapidly at the Financial Times."

For more on the Mashable Media Summit See:

Hearst: Making Headway on Mobile but Still Bullish on Print

Edelman’s Rubel: Get Ready for a New Era of Hybrid Media