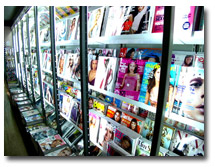 The latest figures from the Audit Bureau of Circulations were released this morning, and, as expected, a number of high profile consumer magazines took a big hit in overall circulation while others saw a precipitous drop at the newsstand.

Among the top 25 magazines in terms of total paid and verified circulation, only AARP (with a membership-based paid circulation of 23.4 million for its bimonthly magazine) showed an increase of more than two percent over the second half of 2006. Time (-17.57%) Playboy (-10.04%) and Reader’s Digest (-7.64%) all showed significant drops in overall circulation.

In terms of single copy sales, seven of the top 10 showed decreases in sales in the last six months of 2007 versus the previous year, with Glamour (down 13.24%) taking the biggest hit. American Media Inc.’s National Enquirer (-15.25%) and Good Housekeeping (-20.71%) also saw significant declines among the top 25 magazines sold at the newsstand. Even Every Day with Rachael Ray, one of the industry’s most heralded launches in recent memory, struggled to match its 2006 newsstand success, with its single copy sales dipping 6.37 percent. (The magazine, however, more than made up for it in total subscriptions, climbing 133.7 percent—one of the largest increases in the industry.)

While the celebrity titles didn’t suffer a precipitous decline in single copy sales, their former dominance has been tainted with continuing weak performances–even if they are still in the top 25. It wasn’t so long ago when newsstand trackers were commenting that the celebrity category was almost single-handedly propping up newsstand sales as a whole. People (-8.49%), Star (-4.10%), In Style (-8.59%), and Life & Style Weekly (-9.67%) are all down, while In Touch Weekly (.06%), Us Weekly (2.74%) and OK! (7.13%) showed nominal increases.

Still, these seven celebrity titles account for about 32 percent of overall single copy sales in the top 25.

In the consumer business category, most titles were either flat or down in terms of overall paid circulation, with a few notable exceptions. Fast Company’s single copy sales jumped nearly 38 percent, though its overall paid circulation remained flat; BusinessWeek’s single copy sales increased 9.3 percent in the second half of 2007, while its overall circulation inched up 1.3 percent. (Interestingly, Business 2.0—which folded in September—did not have a terrible year, as its average paid circulation decreased just 3.8 percent; it tanked, however, at the newsstand.)

Predictably, the major newsweeklies—arguably the category most affected by the seismic cultural shift to the Web—did little to dispel that notion. Newsweek and U.S. News & World Report were flat; Time saw a dramatic drop of 19.4 percent in single copy sales. Meanwhile, the Economist (up 12.8% overall, 10.1% in single copy sales) and The Week (8.1%) posted circulation gains.

Check FOLIOmag.com throughout the day for updates and Fas-Fax analysis.

THE TOP 25 BY SINGLE-COPY SALES