Magazines: A Reality That Doesn’t Particularly Need Augmentation
3-D technology attract attention, but gets in the way of print's virtues. 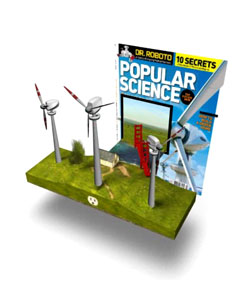 All around us, magazines are undergoing the futuristic process known as augmented reality. It started this past summer, when Popular Science worked with a company called Metaio to create a cover which, when held up to a computer’s Webcam, appeared on-screen in a form that was half live video, half 3-D animation, with 3-D animated wind turbines that spun when the reader blew into the computer’s microphone. (The whole extravaganza was sponsored by wind turbine maker GE.)

More recently, Real Simple announced that its December issue would use similar technology from Total Immersion to create a 3-D gift box filled with video content from advertisers. And the December issues of gaming titles from Future US will feature augmented-reality ads for a game called Operation Flashpoint: Dragon Rising. Hold the ad in front of your Webcam, and a 3-D animated battle will break out on your display.

In multiple ways, it feels like deja vu all over again. Magazine publishers keep attempting to inject interactivity into their print publications via high-tech features that appears to great fanfare and never seem to go much of anywhere. I’m thinking of everything from the CueCat, the legendarily unsuccessful feline-shaped barcode scanner adopted by Forbes and Wired in 2000, to Esquire’s flashing e-ink 75th anniversary cover from last year. Augmented reality is sexier than either the CueCat or e-ink, but in its current form, it produces the same sort of  basic cognitive dissonance.

Such "breakthroughs" attract attention, but they usually seem to get in the way of print’s virtues rather than to accentuate them. Both the CueCat and augmented reality presume that magazine readers want to sit at a computer, magazine in hand—when effortless portability is one of the key benefits that the printed word retains over the Web. And Esquire tried gamely to deal with the limitations of the still-rudimentary, monochromatic e-ink technology—but the resulting cover was far less compelling than most of the ones it produces with plain old non-electronic ink.

The best magazines have infinite potential to thrive in the digital age, but that the secret to success won’t lie in trying to be digital. Letting magazines be magazines is a far smarter strategy: If I were a magazine editor today, I’d be redoubling my efforts to deliver the most useful, imaginative, well-packaged service journalism possible. And if I were a marketer investing print advertising dollars, I’d want my messages to appear in the publications that did the best job of engaging readers through high-quality, ever-evolving editorial content.

I don’t mean to entirely dismiss augmented reality. The technology has the potential to develop into something genuinely useful. Imagine, for instance, seeing exactly what you’d look like in a particular pair of eyeglasses by viewing an augmented-reality feature that digitally painted them onto your on-screen image.

And hey, gimmicks can be fun, at least for awhile. Yet another faddish innovation that augmented reality reminds me of is the spate of ads back in the 1980s that played tinny music via embedded sound chips. Anyone want to argue that those changed the magazine industry for the better?