Magazines Double Down On Tablet Commitment
Fifty titles reported digital circ. of under 30,000 in 1H 2012. 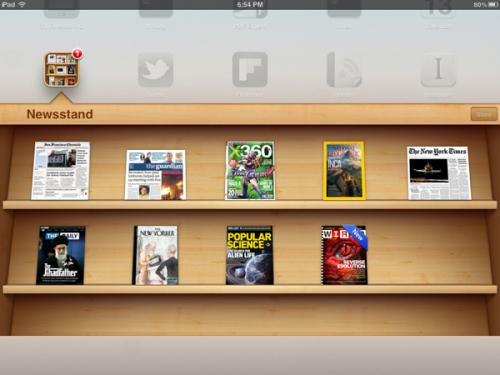 The magazine industry’s faith in the future of tablets is not easing up, even though advertiser support for digital editions has been slow in coming and these platforms still represent a small fraction of overall distribution for most books. According to the latest analysis from McPheters and Co. iMonitor, which tracks thousands of branded media apps, the number of apps from publishers continues to grow month over month. By its count 9,125 publication-related apps were available in a range of app stores in October, more than double the 4,299 available on the same month last year. And up from the 8,839 in September. The market has expanded steadily throughout the year.

Leading among group publishers is Hearst, from whom iMonitor counted 89 apps, followed by Time Warner with 84, Conde Nast with 83 and Future Media with 82.

Getting a handle on circulation benchmarks is a bit tougher, since only 256 titles are now reporting digital circulation is their ABC reports in the first half of 2012. Among those that do include their app editions in the audited counts, however, the share of overall circulation coming from digital versions is 5.7 percent, up from 4.7 percent in the second half of 2011. The limited benchmarks we do have around sales of magazine apps does show strong growth, however. During the second half of 2011, only 28 titles were claiming digital edition circ. of under 30,000, but in H1 2012 that number grew to 50. At the higher end, five titles went to more than 30,000 but less than 100,000, up from 3. And now 1 title, Game Informer, enjoys a digital edition circulation of over 1 million.

Apple’s iOS continues to be the platform on which publishers develop and deploy their most advanced tablet editions. It is also far and away the platform delivering the highest sales. But according to Rebecca McPheters, CEO, McPheters & Co., the migration to emerging tablet platforms comes at a cost. “The average publisher is now on 4.6 platforms,” she says. “There is a dramatic increase in the number of apps individual publishers have. Multiply that by all the other platforms, and the complexity of this undertaking for publishers has scaled up more rapidly than the revenue potential. They started on the platform with the greatest revenue potential and as they expand onto these other platforms their return on investment is diminishing.”

By iMonitor’s count the penetration of magazine titles across iPad, Nook and Kindle are now at about the same levels with between 73 percent and 79 percent of U.S. publisher present on each of the platforms.

She also notes that in the last year many magazine shave reduced the number of enhancements they bring to each issue, which are time consuming and expensive. Some publishers argue that they have discovered consumers themselves are not always asking to be dazzled on every page of a tablet edition. But this pull-back may also reflect the costly fragmentation of effort and resources as new platform demand their attention. “There is a regression towards the mean,” McPheters says. “It means we see fewer outstanding apps and lower levels of enhancement than we did a year ago.

Another major change in tablet publishing has been the dominance of Adobe’s digital publishing platform, which now accounts for 857 or 13.5 percent of all the publisher apps iMonitor follows. The next most popular platform is Pocketmags with 567 titles, Pixelmagags with 428 and Woodwing with 272. Adobe, however, powers the five titles that iMonitor ranked highest on its latest qualitative ratings.