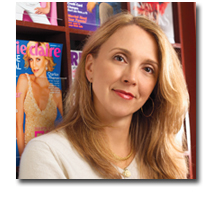 Publishers have a lot more to worry about than just publishing a print magazine. Most are publishing online, to a bevy of mobile devices and to various social media. Yesterday’s production department has had to morph into a tech-savvy group of multi-taskers.

“It’s an exciting time and it’s a time of great change,” said Ellen Payne [pictured], director of editorial operations at Hearst. “Traditional production people are wondering, ‘where do I fit into this New World Order’? You should be able to do more than just one thing. The traditional production departments—the people with the strongest technical skills—will have a bigger role to play down the road.”

Hearst shook up its production department about five years ago by doing away with silo-ed, individual production teams for specific magazines and created a core production team that services all 15 titles. “We have a core centralized production team of four highly skilled people that handle 17,000-plus edit pages a year,” Payne said. To make it work, Hearst has automated a bunch of things and designs pages as cleanly as possible, Payne adds. This new team also handles the production of Hearst’s digital magazines, such as Popular Mechanics, which are published by Zinio.

The ability to publish to multiple outlets wouldn’t be possible without the ever-developing technologies publishers have come to rely on. Hearst uses Adobe InDesign, InCopy and K4 for its editorial prepress side. The company also uses the plug-in Made to Print to automate much of the editorial workflow. And it uses Kodak’s Prinergy and InSite prepress portal to send pages to the printer and PDFs to its asset management system, Payne says. Prinergy enables the publisher to do a lot of virtual proofing and press-side virtual proofing at printers. “It saves a lot of time and energy and paper,” she said. Six months ago, about half of Hearst’s titles were virtual on the press side and two to three were virtual internally. The company plans to do virtual proofing on a wider scale and will roll that out over the next year, Payne said.

The production workflow at Hearst looks something like this: When the edit pages have all gone through the editorial and design processes and are ready to go to the printer, the production staff uses Made to Print to send files to the printer at Prinergy. At the same time, Made to Print sends files to Hearst’s archives – a temporary repository where files are manually collected and bundled and uploaded to the FTP site where it is outsourced to India to have XML added. The files come back within 36 to 48 hours. The digital staff then grabs the files from the FTP site and puts them into the home-grown XML repository site. From there, files are sent out to syndication partners and can be adjusted to fit whichever XML feed they require.

All of Hearst’s digital systems were built from scratch using open code. “We can maintain controls and updates; the same for the ad platform, the circ platform, etc.,” said Erin Dailey, director of project process and business standards. Dailey is responsible for maintaining resources and standards throughout Hearst’s digital media and identifying repetitive actions or things that could be automated—a task most publishers should employ.

“The beauty of having XML created in India and put on FTP is we can do whatever we want with it,” Dailey added. “We have an automatic process and have our open-source internal platform. Our CMS platform is handled by internal engineers, so all a Web editor has to do is go in and grab it.” According to Dailey, the average time for print to Web production for Web editors is now between two to five days thanks to all of the automation the publisher has incorporated. That compares to two weeks from start to finish with the old system.

Hearst also uses a program called Meebo that allows it to share content across all of its different Web sites and extends its brands into the social networking arena, Dailey said.