The Magazine Medic
An industry expert offers a critique of 'The Intelligent Optimist'. 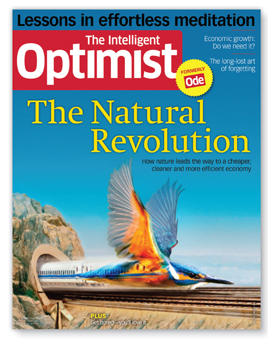 Some people are terrible at naming things.  And babies. Remember the New Jersey couple who thought Hitler would be a “cute” name for their infant son? David Bowie tagged his kid Zowie. Jason Bateman chose Maple for his girl. Bad things happen to good newborns.

You may well ask: So what? Well, when the Medic is examining a patient, every lump and lesion matters. The new name of Kamp’s magazine is, frankly, odious. You hear it and your face puckers. That’s a shame, because the bimonthly’s stated raison d’etre (“We believe in…ongoing opportunities and the creativity of humankind”) is plainly commendable.

However, it appears that Kamp has lately put most of his energy into developing TED-like conferences. He’s also promoting an array of merchandise and services intended to heal restless souls. All beneath the TIO brand.  This is worrying, if only because the magazine itself requires immediate attention and an IV drip.

What We Prescribe
• Speaking of hideous names, Kamp has a big section in the back of TIO he calls “Chronicle of the Undercurrents.” This sounds like the title of a bad Tom Cruise summer film. It is, however, a mashup of stories, speeches, and so on from other sources. At the very least, let’s drop a clarifying deck in there. As a holistic practitioner with nothing but good intentions, we ask that a book’s readers always be priority number-one.

• For the $9.99 cover price customers are getting a book that features a healthy gut—usually several long pieces that are well crafted—but undernourished content front and back. What’s more (or less), there’s barely any artistry here—not in design, typography, or photography. The editors need to deliver a more fully formed package if they’re going to ask a premium for it.

• Columnists should not be sprinkled throughout the magazine as if they’re some sort of garnish. Edit mapping must be surgically precise. And awarding a full page to a former TIO intern to discuss her fine utopian dreams? That smacks more of expedience than optimism.

• A radical move would be to kill off the entire FOB, or reinvent it as a tight two-spread opener. As is, it’s basically a cold stew of clips. The late, lamented GOOD magazine, which once was a sort of competitor to TIO, did these kinds of rewrites more cleverly.

Medic’s Note
As much as we regret having to say this, it may be time to alert next of kin.

A well-known reporter, writer and editor—at Time Inc., Primedia and other American publishing companies—Cable Neuhaus has frequently been called on to help create, repair and run consumer and trade titles of various kinds.