Lauer on Martha: ‘The Only Thing We Haven’t Done is Have Sex’
Notes from the Magazine Lifetime Achievement Awards. 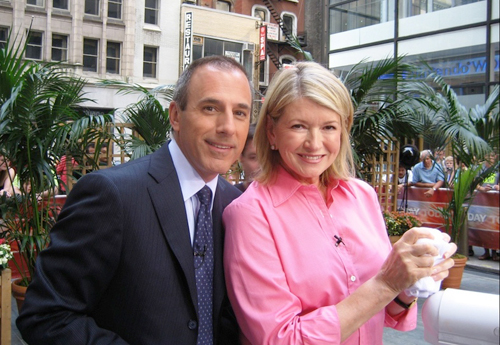 Funny, if odd, moment at today’s Magazine Lifetime Achievement Awards in New York. Matt Lauer, the Today show host, turned the induction of Martha Stewart into the Magazine Hall of Fame into something of a Friar’s Club Roast. Lauer said of his friendship with the Doyenne of Domesticity:

“The only thing we haven’t done is have sex—and if you would’ve just put down the glue gun that might’ve happened, too.”

Lauer also spoke of Martha’s universal appeal among women, men “and, yes, even some straight men.”

“I commend [the MPA] for ignoring your persistent steroid use,”
Lauer said. (There was no mention of the imClone stock scandal nor
Stewart’s subsequent jail term.)

Lauer admitted he was exacting a bit of revenge for the skewering he received from Stewart at his own Friar’s Club Roast in October.