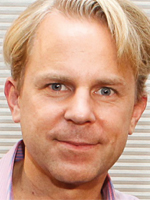 • Smith was named Bloomberg Media’s CEO in July after leading Atlantic Media’s efforts as president for four years. The launches of Quartz and Atlantic Wire were among his successes, as well as leading the company to profitability.

• Though new to his role, Smith has laid out a vision for Bloomberg that includes an emphasis on entrepreneurial development and individual talent.