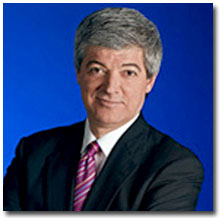 It’s been only a week since BusinessWeek executive editor/BusinessWeek.com editor John Byrne confirmed the rumors and announced his resignation from the magazine, but already has revealed details about his new media venture, called C-Change Media. Byrne [pictured] has launched a Blogspot account about it, for which he conducted an interview with himself in what he said was an effort to explain to his curious friends and colleagues exactly what he’s up to.

The catch is that he doesn’t say exactly what he’s up to.

Can you be more specific about what C-Change will do?

Not yet. It’s too early to tell everyone what our first products will be, but I do envision more than a single platform. It will be a network of niche products for the business audience with an emphasis on mobile applications.

While lacking specific details, Byrne said C-Change (“For the past five years, we’ve been witnessing nothing less than a sea change in the media business.”) will tap into the “unprecedented opportunity” he sees ahead on the horizon for new media entrepreneurs. “I passionately believe that the future of media is digital and that newcomers have tremendous advantages over incumbents,” wrote Byrne. “Most of traditional media remains in a complete meltdown, dragged down by high costs, old ways of thinking and legacy work processes … we’re going to see a media boom in the next three years, the launch of tens of thousands of new media entrepreneurs on the Internet.”

A complete meltdown? Yes, please go on: “As tough as the three years have been for traditional media, the next three are going to be nothing less than brutal: more closures, greater losses, increasing layoffs of highly talented journalists and editors.” Byrne went on to say that he believes the new generation of print will emerge from dominant online products.

One telling detail that our comrades at FishbowlNY spotted: Byrne launched the C-Change Media blog on October 17—less than a week after former BusinessWeek owner McGraw-Hill said it agreed to sell the magazine to Bloomberg. I guess Byrne’s wheels have been turning longer than we assumed.