With More Issues and an Increased Rate Base, EatingWell Declares Commitment to Print
A Q&A with publisher Tiffany Ehasz on how the epicurean title is drawing advertisers (and millennials) to the print magazine. 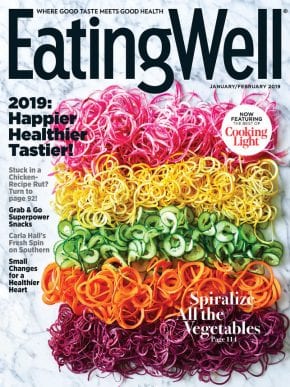 Competitors became stablemates a year ago this month, when the parent companies of health-conscious epicurean titles Cooking Light and EatingWell made their blockbuster merger official. One of the more recent developments in the year-long integration of the two magazine publishers was an unfortunate side effect: the announcement that former Time Inc. title Cooking Light was ending regular print editions, forging ahead as a digital brand with intermittent, newsstand-only SIPs and sending its subscribers and regular print features over to EatingWell, which has been owned by Meredith since 2011.

For EatingWell, which had already been showing signs that it was capitalizing on growing public interest in healthy eating, incorporating the more widely circulated Cooking Light was a major boost, resulting in four extra issues per year and a 78-percent increase to its rate base.

“Right now, we are focused on print vitality. This is our commitment,” says Tiffany Ehasz, publisher of EatingWell since coming over from Rachael Ray Every Day in late 2017. “It reflects our belief in and dedication to a healthy print brand.”

With the debut issue of the “new” EatingWell on newsstands now, Folio: chatted with Ehasz—who oversaw a five-percent uptick in ad pages last year prior to the combining of the two titles, per PIB data—about bringing Cooking Light into the fold, what advertisers want from the magazine and keeping print vital in 2019.

Folio: In the time since you joined EatingWell in 2017, what do you think has allowed it to not only maintain advertisers, but also attract new advertisers to the print magazine?

Tiffany Ehasz: I think it’s all about the conversation that EatingWell has been having for the past 28 years. We’ve always provided amazing content, like recipes and travel writing and James Beard Award-winning chefs. But most importantly, we did all of this amazing content through the lens of food origin, environmental impact and sustainability.

What’s been really cool about coming onto this brand is that “eating well” is now mainstream. We’ve totally gone to the masses. And we know that because food culture in itself is pretty amazing right now. Non-GMO, locavore, these are words that people are using in their everyday vernacular. When we saw Amazon buy WholeFoods, we knew that this trend would go mass. We know people are traveling through food to relate to cultures and communities, and we know people are eating paleo, vegan, gluten-free, not necessarily because they have to, but because they want to try out new trends in food.

We’re seeing this trend go mass, and I believe that a lot of our advertisers and consumers are on this train as well.

Folio: At the same time, you’re not the only ones seeing this trend go mass. It’s a crowded space, from a media standpoint. Is it that 28-year legacy you spoke of which sets EatingWell apart?

Ehasz: Absolutely. We’ve been nominated for 25 editorial James Beard Awards. We’ve won 15 of them—and again, we’ve been producing this kind of content for almost 30 years, being that authoritative voice. So we are really confident in our positioning amongst our competitors.

Folio: As of November 2018, ad pages are up 5.3 percent year-over-year, per PIB data. You mentioned that overall revenue is up almost 14 percent. Where is most of the revenue growth coming from, in terms of advertisers?

Ehasz: It’s coming from a lot of brands right now; we’ve seen from mainstream brands like Kind [snacks], we saw new pages from Tyson and Unilever. A lot of these companies want to align with us because they have the same vision for their food as we do ours. Tyson wanted to align with us on family messaging. Unilever has a great sustainability effort going on. We’re gaining traction with major advertisers who have never advertised with EatingWell in the past.

Folio: What are you hearing from those brands who haven’t advertised in the magazine before? What do they want from a title like EatingWell?

Ehasz: I think what they’re looking for, really, is the fact that we have amazing recipes and all of this lifestyle content, but we also have really great marketing programs that are super turn-key, that expand not only in print but digitally, socially, and also from a PR perspective.

These are the 7 ingredients you should always have in your freezer for fast healthy meals: https://t.co/IkU0SKmSXD (sponsored by @TysonBrand) #ad pic.twitter.com/xQ2YmsT465

Folio: Are there any new offerings that are sparking particular interest among advertisers?

Ehasz: Our editorial tent pole initiatives are making a lot of headway with advertisers. They’ve driven a lot of success for us in the past, and we have a fairly new one that’s out this year. “American Food Heroes” is an amazing story we do every July/August issue celebrating people and/or companies that are doing great things in the food world. We’re finding that our advertisers want to align with that content in-book.

We also have “Plant Your Plate,” which is a joint content initiative with Better Homes & Gardens. Better Homes is going to teach you how to garden everything in your sprawling backyard or your mini fire escape, and we’re going to show you how to plate all of these awesome ingredients. That’s driven a ton of success for advertisers this year.

And then our latest and greatest tent pole initiative, “Food with Purpose,” which is celebrating an individual who is bringing together communities through food. It actually was inspired with an eight-part video series, and we also dedicated a section in our magazine to bring it to life in print. That’s also getting a lot of traction in the marketplace.

Folio: Is it safe to say that you see a bright future for the print edition of EatingWell?

Ehasz: I absolutely do. Listen, our millennial audience grew significantly prior to the combination of these two brands. I don’t have our new numbers quite yet. But the millennial generation is very interested in this conversation. They want to make the world a better place; they’re so hyper-informed. We saw a huge jump in that segment this year, and we only anticipate that it will continue to grow. As this conversation becomes more mainstream and resonates with that younger audience, we only see a rise in our circulation.

Folio: How has the increase from a bimonthly frequency to 10 issues per-year impact the sales operation?

Ehasz: It’s a great impact. We have more content. There is so much more real estate to play with. From an advertiser perspective, we used to hear that they wished we had more issues, or two holiday issues to run, and now we can deliver it. 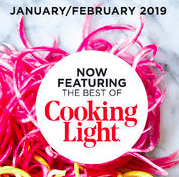 Folio: What are some of the ways you kept Cooking Light’s readers and advertisers engaged after incorporating it into EatingWell?

Ehasz: From a consumer perspective, we made sure that every single Cooking Light reader received our Jan/Feb issue. In that first issue, we have an absolutely beautiful cover, and on the cover it has an edit burst that says, “Now featuring the best of Cooking Light.” We wanted the Cooking Light readers to feel right at home once they received EatingWell in their mailbox. And then the first thing they’re going to see when they opened up the magazine was an editor’s letter from Jessie Price welcoming them to the first issue of the combination.

There’s a QR code on the editor’s letter [that links to a webpage] breaking down what they can expect to see from EatingWell as we move forward. And then the first section of the magazine is “Dinner Tonight,” which is an editorial staple that we brought over from Cooking Light.

The messaging to buyers was pretty simple, from a product perspective. The photography, the paper stock, the content that we’re covering is really on-trend with what is happening with food today. That resonates with advertisers and was really helpful in bringing the Cooking Light advertisers over to EatingWell.

Folio: From a retention standpoint, we’ve heard about the Meredith Sales Guarantee, but what are some of the other ways you try to show the ROI and keep advertisers coming back to the print product issue after issue and year after year?

Ehasz: We have starch reporting that we do for our advertisers, and we know that our readers are engaged from cover to cover, based on the research we see. I think Meredith, overall, has had amazing success in reaching engaged readers and will continue to do that.