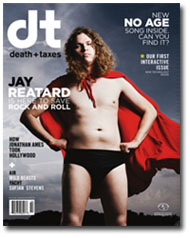 Mobile technology from provider Mobot allows Death+Taxes readers to use their mobile phones to send MMS text messages or e-mails of the November/December issue pages stamped with red icons (camera, video camera or head phones), which represent additional content waiting for download. Snapping a photo of the picture on the page and texting it to “dt@mobot.com” will show additional editorial interactive content like MP3 tracks, videos, and still photos.

“We didn’t want to deliver technology for technology’s sake, but to create a better user experience,” said publisher Doug Perkul (formerly associate publisher at Spin). One of the elements features guitarist Marnie Stern “shredding.” “We invited her into the office, gave her an amp and an electric guitar, brought in videographer and had her do this thing called 30 second shred as part of the issue’s Guitar Hero story."

For the music review section, Mobot’s technology allowed D+T to provide 30-second tracks for readers to listen and rate themselves on a scale of 1-5. The readers’ music reviews will be published in the next issue, Perkul said.

What made this issue distinct for D+T was using mobile tech to enhance editorial—unlike most publishers, who use it as an ad gimmick—in addition to the fact that advertiser Scion footed the bill. Perkul had “no idea what they [Scion] paid to Mobot.” Perkul said the advertiser’s incentive was to “step in and act as an innovator for this issue.”

While Scion and Mobot wouldn’t disclose the project’s cost, a Mobot rep said rates for mobile image recognition campaigns range between $12,000 and $45,000, based on duration, media buy, enabled images/ads, complexity and reach (regional/national/international).

Scion also placed three ads in the magazine, which come out to an almost $20,000 ad buy, according to the Death+Taxes rate card.

In return for the technology, Death+Taxes placed a small Scion logo on the front cover (with text recognizing them as the provider of the tech), a folio pagination, and an editor’s letter mention. Despite the interactivity of the issue, none of Scion’s ads—or any other ad, for that matter—used interactive technology.

While the editorial process was “normal,” Perkul said it was “twice the work. We had to have a lawyer draft up all of the paperwork, since there is electronic delivery of certain assets, bring a videographer on board, as well as edit the interactive content. It probably cost us several thousand dollars between video editors and lawyers,” he added.

The issue, which hit newsstands October 26 with a $4.99 cover price, has already seen 2,000 messages (readers retrieving data) in the first six days, according to the Mobot report figures. “For a publication with 135,000 readers, this is huge,” said Perkul. “Our Mobot rep told us that he’d never seen this kind of adoption in any of their campaigns.”