IEEE Spectrum Wins Grand Neal at Virtual Neal Awards Ceremony
ALM, Arizent and Winsight Media were among the other big winners as the show went on in a socially distant, video format. 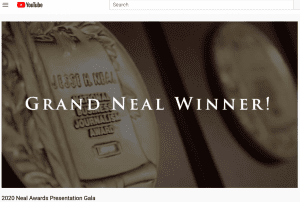 IEEE Spectrum took home the Grand Neal, top prize at the annual Jesse H. Neal Awards, which honored the best in business journalism in a video presentation uploaded Friday afternoon, pivoting to a virtual event for the first time in lieu of an originally scheduled luncheon on March 27.

“This is a big change for all of us,” remarked Chelsea Emery, editor-in-chief of Financial Planning and host of the video ceremony. “But it also means we have the largest audience in Neals history.”

Typically given to the best single entry across all of the award program’s 21 categories, this year’s Grand Neal went to “Project Moon Base,” a multi-part package published in IEEE Spectrum‘s July 2019 issue about building the first permanent settlement in space. It marks the fourth Grand Neal for the engineering and applied sciences journal, which previously earned the honor in 2007, 2010 and 2013.

The Grand Neal was one of four total awards won by IEEE Spectrum, a total matched by Randall-Reilly’s Overdrive magazine, while Arizent’s Financial Planning and BNP Media’s Engineering News-Record earned three awards each. At the company level, ALM led the pack with six total wins, followed by Arizent and Winsight Media with five each.

In addition to the 53 standard awards (most categories were broken into two or three groups of finalists, based on brand revenue), four awards were given to individuals.

The Timothy White Award for Editorial Integrity, honoring editors who display courage in standing against outside influences, was won by Ann Marsh, senior editor and West Coast bureau chief at Financial Planning.

“Right now, journalism and the truth itself are both under continual assault,” said Marsh in an acceptance speech included in the video. “At the same time, like the proverbial lump of coal under pressure on its way to the brilliance and resilience of a diamond, we’re getting to see in our lifetimes some of the best journalism ever. I’m humbled and honored to work in this field and to cover an industry that is both vital to people’s welfare and yet remains troubled.”

“If I’ve done work at an editor that merits recognition, it’s because I’ve been working at a publication that encouraged my best efforts,” commented Strickland. “In my nine years as an editor at Spectrum, I’ve benefited enormously from the keen instincts, good humor and dedication of my colleagues.”

View the full list of winners and finalists here.