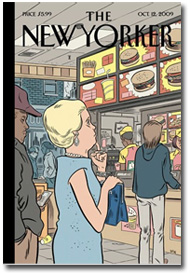 In a deal that’s estimated to be worth $1 million, HSBC Bank USA has purchased a six-ad package in Conde Nast’s The New Yorker. It’s the magazine’s largest single-issue ad buy since August 2005.

The New Yorker’s October 12 Money issue, which hits newsstands today, features three covers—bound in the same issue—which have been created by three different artists. The HSBC ads will appear opposite the three covers, inside the front cover flap, on the inside back cover and on the back cover.

“We’re thrilled that HSBC has come onboard for this unique opportunity,” said Lisa Hughes, vice president and publisher of The New Yorker, in a statement. “Our cover is always a source for conversation and the three unique covers on this year’s Money Issue are sure to get people talking.

As a digital addition to the triple cover project, The New Yorker has created an editorial video that takes readers behind the scenes of the making of the covers, with art editor Françoise Mouly walking viewers through the creative process, discussing the project and the artists’ visions. The video will also appear on NYC Taxi TV throughout October.

About a year ago, the financial services company bought 24 front-of-book ad pages in New York magazine—making it the magazine’s largest single-issue advertiser ever.Having a single sponsor issue isn’t anything new for The New Yorker, either. Target sponsored an entire issue in August 2005.