How to Convince Advertisers to Keep Advertising in a Recession
Tips from 2001. 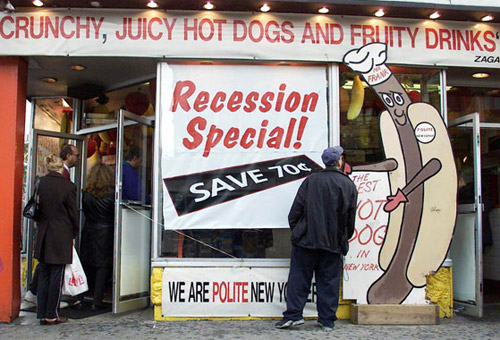 An excellent one sheet entitled "Recession Marketing Strategies" makes a great case why your clients should keep advertising during a recession is found on the Clark Company’s Web site.

I like this piece because it is concise, full of specific examples, and highly credible coming from an ad agency—not a publishing association. This is a find, written in 2001 during the last recession, but the advice is just a true today.

Here is one example:

Over the years hundreds of studies have been conducted to prove companies should maintain advertising during a recession. In the 1920’s advertising executive Roland S. Vaile tracked 200 companies through the recession of 1923. He reported in the April 1927 issue of the Harvard Business Review that the biggest sales increases throughout the period were rung up by companies that advertised the most. After World War II, Buchen Advertising, Inc. decided to plot the sales of a large number of advertisers through successive recessions. In 1947, it began measuring the annual advertising expenditures of each company. When they correlated the figures with sales and profit trends before, during and after the recessions of 1949, 1954, 1958 and 1961, they found that almost without exception sales and profits dropped off at companies that cut back on advertising. Their studies also revealed that after the recessions ended, those companies continued to lag behind the ones that had maintained their advertising budgets. In 1979 another study by ABP/Meldrum & Fewsmith, covering the recession of 1974-75 and post-recession years, showed similar findings. They found that “companies which did not cut advertising expenditures during the recession years (1974-1975), experienced higher sales and net income during those two years and the two years following than companies which cut ad budgets in either or both recession years.”

The findings of six more recession studies to date by the group present formidable evidence that cutting advertising in times of economic downturns can result in both immediate and long-term negative effects on sales and profit levels. Meldrum & Fewsmith’s former Senior VP, J. Welsey Rosberg reports “ I have yet to see any study that proves timidity is the route to success. Studies consistently have proven that companies that have the intelligence and guts to maintain or increase their overall marketing and advertising efforts in times of business downturns will get the edge on their timid competitors."

There are many examples of businesses benefiting from increased ad budgeting in a recession. A MarketSense study during the 1989-91 recessionary period shows brands such as Jif Peanut Butter and Kraft Salad Dressing increased their advertising and experienced sales growth of 57% and 70% respectively. During that time, most of the beer industry cut budgets, but Coors Light and Bud Light increased theirs and saw sales jump 15% and 16% respectively. Among fast food chains, Pizza Hut sales rose 61% and Taco Bell’s 40% thanks to strong advertising support, reducing McDonald’s sales by some 28% MarketSense concluded the study by reporting. "The best strategy for coping with a recession is balanced exploitation of ad spending for long-term consumer motivation, plus promotion for short term sales boosts.

Now, having set the stage, The Clark Company offers these actions steps for marketers:

• Don’t cut your advertising budget, increase it. Let your competition cut theirs.
When you increase your spending, you increase your share of voice. If your competitors cut back, your message grows even stronger.
• Develop a strategic marketing plan so you don’t waste money advertising the wrong message in the wrong place to the wrong audience.
• Reassure your customers. Implement marketing strategies that allow buyers to feel they are minimizing risk by doing business with you.
• Achieve greater media efficiency by taking advantage of softer rates and special promotions.
• Start sponsoring. This type of awareness advertising gives your business valuable exposure to targeted, core audiences.
• Keep your friends. You know who your loyal customers are. Keep in touch with them and let them know what you have to offer.
• Maintain continuity to sustain awareness. Advertising works cumulatively so you have to remind people frequently about your brand or they’ll forget you.
• Step up public relations efforts. Be sure to maintain a media presence with smart, effective PR programs.
• Don’t "cheapen" your advertising by trying to save on creative or production costs. Your customers will notice and worry about quality. This is a time to stress quality and value. I recommend you printout the entire piece and share it with your sales staff.

I recommend sharing this with your sales staff and/or e-mailing the link below to all your advertisers.