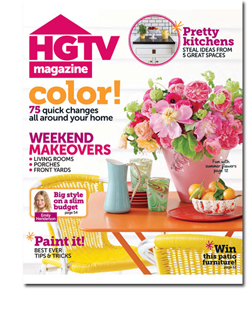 HGTV Magazine, published by Hearst in a partnership with Scripps Networks’ HGTV, is following in the footsteps of its big sister title, Food Network, by dramatically increasing its rate base in the next year. The magazine will jump to 700,000 with the January/February 2013 issue, then 800,000 in July. In all, HGTV will have increased its rate base 78 percent.

The increase comes only 8 months after a test issue of the magazine first appeared on newsstands last October with a rate base of 450,000. "With the strength of the HGTV brand behind us, we have created a new kind of magazine, home/lifestyle, that is resonating deeply with readers and is building incredible momentum in the marketplace," says HGTV chief revenue officer/publisher Dan Fuchs in a statement.

In the fourth quarter of 2011, the magazine tested two issues, then debuted with the first official issue in June/July. Three more issues are planned for 2012. The first test issue blew through its distribution and Hearst did another press run of 135,000 more copies.

Food Network magazine, the first joint venture between Hearst and Scripps, has seen similar success. That title has gone through seven rate base increases, now at 1.45 million from a launch rate base of 400,000. That title also launched with two test issues and quickly scaled to 900,000 after those tests.

The jump for HGTV is a good sign for the brand, at least in terms of its survivability alongside the rest of Hearst’s magazines. "Magazines with 300,000 units of circulation aren’t optimal for us—we’re really looking for 700,000 at the low end and 4 million at the high end, we need a passionate audience of scale," said John Loughlin, executive vice president and general manager for Hearst Magazines, in an article for Audience Development magazine examining the relationship between magazine brands and their TV show counterparts.