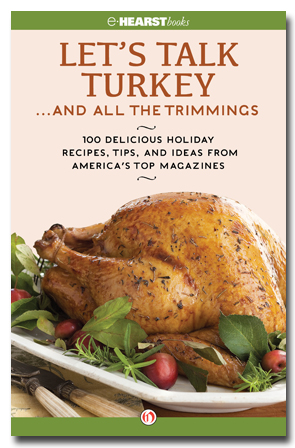 Hearst Magazines has announced the release of a new ebook aimed at the holiday chef.

The 235-page digital-only publication, Let’s Talk Turkey, is a compilation of recipes and cooking tips from Hearst titles including Country Living, Good Housekeeping, Redbook and Woman’s Day. Starting Tuesday, it will be available for $3.99 on all Apple, Kindle and Nook platforms.

The ebook is the first major move for Mark Gompertz, creative director of content extensions for Hearst Magazines, who was brought on in July after a lengthy tenure in the book publishing industry. Most recently, Gompertz served as a consultant and project manager for enhanced ebooks.

"My job is to go throughout the company and find assets and find new revenue streams," he says. "It seemed to me to make sense to make use of all the material in the archives. It’s a chance to use this timeless material that hasn’t had much use other than in the magazine it first appeared in."

Hearst has repurposed content similarly in the past, most notably with its "bookazine" ventures, and has put out branded ebooks under its Cosmopolitan and Seventeen titles, among others, but has yet to publish complied magazine content from across its products in digital form.

"We’ve done quite a few print and ebooks, but they were always branded," Gompertz says. "This is really the first time that we are going, as David Carey (president of Hearst Magazines) always says, to swim across lanes."

Unlike Hearst Magazines’ other titles, Let’s Talk Turkey is unsponsored and features no advertisements. And that’s how it will remain for now, at least.

"In the book world, you’re not used to seeing ads in books," he says. "Of course the whole digital world is changing constantly, so I would never rule it out-but at the moment, that is not the plan. This is really just a pure commerce play."

While Gompertz doesn’t anticipate a follow-up until March, he hopes the ebooks, developed with digital book publisher Open Road who has worked with Hearst on previous projects, will become monthly staples.