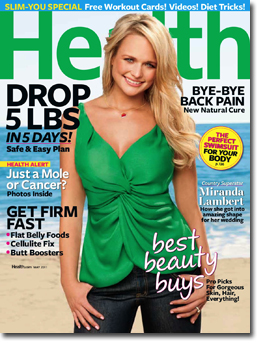 Health magazine’s May issue features Microsoft Tag technology as part of an effort to drive readers to bonus content online. The program requires readers to download the free Microsoft Tag app, which allows the reader to scan the issue via smartphone to see bonus video and slideshows related to the issue. The feature went live on April 19 and in the last six days the magazine has generated 5,000 downloads with many subscriber issues yet to be delivered, according to publisher Dave Watt.

The Microsoft Tag program is packaged with the Health Beauty Awards, which recognize best buys among beauty products. "Microsoft presented this to us and we thought it was a really cool thing but we had to have the right idea," says Watt. "We thought, what if we use the tags to bring the awards to life? We’d have judges appear in video to talk about the products, why they picked them and offer tips to readers such as the best way to apply eye shadow. We didn’t want editors just saying, ‘I picked Olay because of x.’ That’s not adding value, that’s just parroting what was in the magazine."

While Microsoft Tags are free to create, Health hired an outside company to shoot the videos and a mobile vendor to create connections with the tags and mobile phones. "You have to have those videos mobile-enabled to be properly viewable on smartphones," says Health director of integrated marketing Zovig Garboushian.

The video features bonus content beyond the beauty awards, including a behind-the-scenes look at the cover shoot with singer Miranda Lambert, yoga moves and spring style tips. "When Microsoft met with us, they said, ‘To make this work, you’ve got to have it integrated throughout the magazine, not just in one little section,’" says Watt.

Readers could also register to win products featured in the Beauty Awards as well as a sweepstakes to win a $1,000 Sephora gift card.

There are a total of 17 tags in the issue–13 videos and four slideshows. Of the 13 videos, seven were tied directly to winning brands in the Beauty Awards. "We don’t pick the winning brands by advertisers, it happens independent of that," says Watt. "Seven of the videos were tied to actual winners and we did go to those brands’ agencies and ask if they wanted to be part of this."

Health asked for an incremental magazine ad rather than selling directly against the digital component. Ad pages in the May 2011 issue are up 22.5 percent over May 2010.

The magazine is planning to repeat the program in October for its Food Awards.