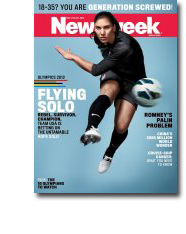 On Monday it was announced that family of the late Sidney Harman is freezing their 20-month investment in Newsweek/Daily Beast Co. That gives the other party, the Barry Diller-led IAC/InterActive Corp., a controlling interest that will grow as more money is put into the venture.

Reuters reported that the aftermath from the April 2011 death of the 92-year-old Harman was the reason for the decision. Only he, per the family statement, "was actively involved in the Newsweek/Daily Beast business." Jane Harman, his widow and estate trustee, will remain on the corporate board of directors.

The news was not a major surprise. Sidney Harman was a billionaire through his now-59-year-old Harman-Kardon audio/stereo company, and his being a fan of Newsweek is why in August 2010 he "rescued it" from The Washington Post Co. for $1 and his responsibility of more than $50 million in liabilities. The merger three months later with the IAC-owned Daily Beast was one of convenience, as Newsweek got a growing Web site (and Tina Brown as editor-in-chief) while The Daily Beast’s identity grew substantially through its branding with what some would argue was a since-1933 American institution.

min was told that before Harman took ill, he was often seen in Newsweek’s New York office and occasionally made sales calls with then-publisher Ray Chelstowski.

Neither Jane Harman nor the family’s children had that passion. It was once thought that Newsweek might in some way be an outlet for the former Democratic congresswoman from Los Angeles (e.g., her writing a column), but that never happened.