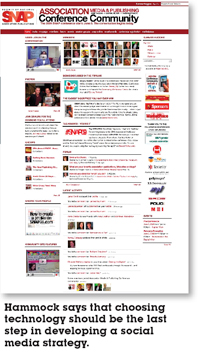 For association publishers—whose mission is social by definition—the concept of an online community is not only natural—it’s vital.

Nashville-based custom publisher Hammock Inc. first began experimenting with social media (with forums and listservs) in 1993, well before “social media” became as ubiquitous as “the Internet.”

Earlier this year, they got to put some of those tests to work, when the Society of National Association Publications (“SNAP”—now called Association Media & Publishing) hired Hammock to manage social media for one of its signature events—the SNAP Conference, which was held in Washington, D.C. in May.

“We knew we were changing our name to include ‘media,’” says Amy Lestition, Association Media & Publishing’s executive director. “I knew we had to have something in place with some backing to it. We couldn’t say, ‘Hey we’re all media’ and not have a social network, much less a Twitter feed. You know, baby steps.”

In March, Hammock created an online “pre-conference community” for SNAP using a premium version of the Ning platform (“one that allowed us personalize the look, remove the ads, etc.”).

“In an environment where magazine and media related conferences have been hard-hit, we believed that a ‘pre-conference community’ designed to be focused on a short time-frame leading up to the meeting, would be effective in getting potential attendees excited about—and thus, committed to—attending the conference even in a recession,” CEO Rex Hammock says. “The other goal was add to value to the attendee experience.”

Lestition notes that while the conference is technically two-and-a-half days, most attendees go for just one, limiting their chance to network face-to-face. “It’s hard to form those connections in a day,” she says. “We wanted to get those conversations started before they got there.”

Hammock worked with SNAP on the pre-conference community—coordinating content with the traditional marketing mailings SNAP was doing—as well as on the development of a “live” site that aggregated photos from Flickr, tweets from attendees, blog posts and videos.

The “live” site now serves an archive of the conference and will be used in marketing next year’s conference for both attendees and potential sponsors, while the pre-conference community will live on as a its own social network.

The result was increased attendance at the show (318 attendees, compared with 298 the year before), and a sold-out exhibit hall. “We definitely exceeded our sponsor and exhibit goals,” Lestition says.

The key to this social network’s success, Hammock says, was having “one good objective”—in this case, generating excitement and buzz for a show—rather than trying to be an all-encompassing platform.

“Too often, associations or magazines set unattainable goals for their social networks, or the goals they have are too broad,” Hammock says.

Another pitfall is spending too much time worrying about the technology. “The hard part of any community or forum is not the technology,” Hammock says.  “The easiest way to doom anything related to social media is to start off talking about technology and features and platforms. If you start out with ‘integration with your legacy CRM’ as a social media goal, there’s a high degree of risk that you’ll fail. And there’s a 100 percent chance you’ll not have anything to show for six months to a year.”

Instead, the goal should be understanding your audience.  “It’s understanding the motivations of why people join—figuring out who to market it to, seeding it to get people to join, figuring who and how to reward those who do,” says Hammock. “The least important part is the technology.”