Google has launched a news product called Fast Flip—a scrollable collection of thumbnail images of article pages from a current stable of about 40 content partners. Participating publishers will share in contextual ad revenue. 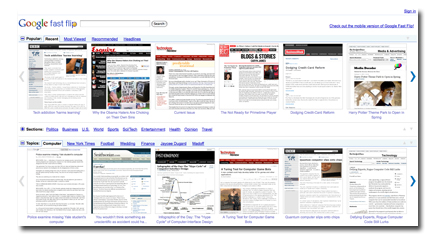 Google designed Fast Flip to mimic a "seamless" print reading experience with a faster load time. Image files of Web pages are presented in a scrolling slide-show format, allowing readers to browse article pages without the wait. "What we need instead is a way to flip through articles really fast without unnatural delays, just as we can in print," said Google in its blog announcement. "The flow should feel seamless and let you rapidly flip forward to the content you like, without the constant wait for things to load."

Clicking on an image takes the reader to that story on the publisher’s Web site. There are no individual links within the page image. Images are too small to read individually in the Fast Flip interface, so readers are encouraged to click through to the site itself.

Readers can browse by brand, topic, section, popular, recent and other formats.

Fast Flip also has a recommendation engine behind it that tracks reading behavior, suggesting similar content from other sources. "In short, you get fast browsing, natural magazine-style navigation, recommendations from friends and other members of the community and a selection of content that is serendipitous and personalized," said the announcement.

Colin Doody, business development and marketing manager for Fast Company, said he’s pleased with the service so far. Referral traffic has been "significant" though he expects it to calm down after a preliminary review phase.

Money isn’t the motivator, he said. Google will get the lion’s share of revenues. "The revenue share is nothing different. It’s based on a 50/50 split and only defined on pages that Fast Company pages get popped up on. Google still captures the majority of the units."

Nevertheless, Doody said his team likes Fast Flip better than Google News, especially for the branding. "We’re big fans of it. I like the fact that there’s branding on it and I know right away what the source is."

Publishers were given the choice of submitting a custom RSS feed for
specific content to be picked up by Fast Flip, or having Google crawl
content as it normally does. Publishers also have a get-out clause,
said Doody, and Google can’t make changes to content without prior
approval. Publishers control what content is made available through the
service.

Doody is less than enthused about the lack of hyperlinks in the Web
page image, and says there’s about a six or seven hour delay in content
pickup. "But that could be because it’s just day one," he said.

The product emphasizes interface over search and it’s not hard to imagine scrolling through these pages on a mobile device. Indeed, Google has a version of Fast Flip for Android devices and the iPhone.

Fast Flip is another step for Google in capturing content in at-a-glance formats. In late 2008, Google added digitized magazine archives to its books.google.com site. The digital copies are exact replicas—scans—of the original print issues, including ads.