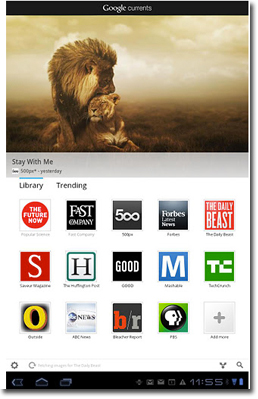 Google makes another move into the content space, debuting its Google Currents app for Android and Apple mobile devices. The company launches its app with a long list of publishing partners (over 150 of them) on board, including CNET, AllThingsD, Forbes, Huffington Post and Fast Company, according to a Google blog post.

Beyond magazine content, Currents also includes RSS, video and photo feed capabilities, public Google+ streams and Google Reader subscriptions. Similar to other aggregated news apps (like the “social magazine” Flipboard, AOL’s Editions and Zite, which debuted this week on the iPhone), there is also a section that recommends content based on users’ interests.

At time of launch, the app is available through the Android Market and the Apple App Store for U.S. users only.

Bonnier has four titles available through Currents, with epicurean publication Saveur “featured” in the app (meaning it comes pre-loaded when the app is downloaded). Other available magazines include Popular Science, Transworld and Parenting.

Bonnier’s chief brand officer Sean Holzman says, “These titles gave us a nice path to go with: the parenting vertical, epicurean, technology and action sports. And we’ll be expanding the relationship with them with additional titles.”

He shares details of the partnership with Google, “For us, its not a paid model. It’s providing our content to Google, where they have the aggregation tools where they can deliver it to people on the platform, and then eventually bring models that will come into play with that. One way will be advertising.”

Bonnier also works with Google to archive PopSci’s content, with every issue from the 1800’s up until the first decade of 2000 included in the database.

Saveur’s website editor Helen Rosner explains the content selection process for Currents, “We’re not creating exclusive channels for Currents, but instead we’re using some of our favorite areas. Recipes, which updates new recipes virtually daily; our main blog feed, the Daily Fare, where we run editorial pieces from print and exclusive web pieces; and our video channel which we update about once a week.”

Rosner says the included channels are also some of Saveur’s most trafficked.

Earlier this year, Google released Think Quarterly, positioned as a companion publication to a data book sent to company associates in the UK. In March, Google opened the first issue with this disclaimer, “We’re flattered by the positive reaction but have no plans to start selling copies! Although Think Quarterly remains firmly aimed at Google’s partners and advertisers, if you’re interested in the subject of data then please feel free to read on…”