The American Business Media Annual Conference last week in Jacksonville, Florida, was a really interesting one, for a whole lot of reasons. This year’s conference was certainly the last of a breed.

With the ABM membership voting last week to approve a merger with the Software & Information Industry Association, the ABM is no more, at least as the 107-year-old independent entity it once was. Now, really, all is up in the air. Whether CEO Clark Pettit stays on board beyond the fall is an open question. Probably not. Same for CFO Todd Hittle. I’ll be following up in the days ahead with the SIIA chief, Ken Wasch, for answers on these and other questions.

In the meantime, some observations: 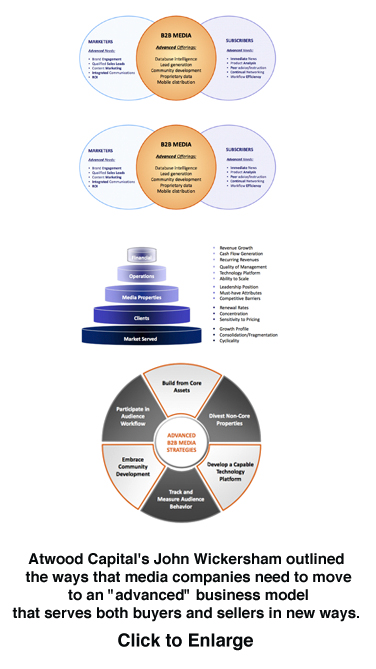 • I had a brief conversation with Wasch at the Saturday night dinner hosted by Glenn Hansen and the folks at BPAWW. There were perhaps 30 people at that dinner, which was a terrific networking event. But I was there in prior years when that BPA dinner was three times as large as it was in 2013. That dwindled group was somehow symbolic of the state of the ABM itself.

• Back in the day, in the 1990s, the ABM event—then called the Spring Meeting—was a true annual gathering of anyone who mattered in the business-information space. It included all the big players of the big companies—mostly middle-aged men whose surnames were also their companies’ names. Everyone wore tuxes and gowns to a formal event on the Tuesday night. (One of those meetings, at the Greenbriar Resort in 2001, especially stands out.) Those executives were the core of the ABM, and there were enough of them to support a robust association. Some are still around, but not enough. It was left this year to Roger Friedman, whose father founded Lebhar-Friedman in 1925, to offer a final tribute to that old American Business Press.

• Later, into the final years of the 1990s and the early 2000s, the ABM meetings were where operating executives and their private-equity backers converged to do deals. The brokerage firms would be there in force, hosting invitation-only dinners and sponsoring lavish cocktail parties and golf. This year, I saw one person from JEGI, and he might have been the only investment banker I saw, other than John Wickersham of Atwood Capital Partners, who noted from the stage that there were no private-equity firms there this year. Again, a barometer of the health of the association.

• The ABM board members and senior staff were remarkably frank about the financial state of the association—one of the reasons for the merger with SIIA was a small cash reserve and a burn rate that might have jeopardized the association’s existence by the end of the year. It was striking.

• I think what happened to the ABM was several things:

1. The disintermediation of marketing communications caused a flood of dollars into search, into lead-generation, and into marketers’ own Web efforts, and out of b-to-b media companies.

2. Spending on digital advertising doesn’t generate the same amount of revenue as print did.

5. Technology media companies like Ziff Davis, IDG or UBM either stopped being involved in the association or they downsized themselves into oblivion.

6. Traditional b-to-b media companies struggled through the recession and vast secular changes, and some opted not to be members of ABM—which as a staff-dependent organization charged relatively high dues.

7. As ABM revenue declined, so did its level of services, causing an acceleration of the pattern.

• At any rate, here we were at ABM 2013, watching the last of the independent ABM conferences. Many sessions were strong, and told of the great amounts of innovation among ABM companies. Wickersham in particular offered one of the most insightful looks I’ve seen of what the traditional model of b-to-b media looked like, and what the advanced model needs to look like (see accompanying slides). The merger with the SIIA seemed promising to most people, and the larger association gives ABM members access to rich resources from like-minded companies.

• One session perhaps summarized the conflict that the ABM of the last 10 years has faced. Rafat Ali, founder of Paidcontent.org and more recently of the b-to-b travel-industry site Skift, called out Northstar Travel Media by name, even as Northstar CEO Tom Kemp sat in the front of the room. Ali lit Northstar up, claiming that the company (and other traditional players in the space) are basically resting on their laurels, have an old-school approach to media, don’t link to other sources in stories, are not innovative, are afraid to take on major advertisers, and don’t have a cohesive view of the travel industry that includes air travel, hotels and destinations under a single umbrella.

Ali described his own startup company as one that doesn’t sleep, that works on weekends, and doesn’t need to own the "story," just the "conversation." In response, Kemp sarcastically noted that it’s true Northstar has an "old-school" problem: It’s called revenue. In response to that, Ali tweeted that, “a 60mn company, with tiny margins, isn’t exactly a revenue behemoth in travel, for being decades old.”