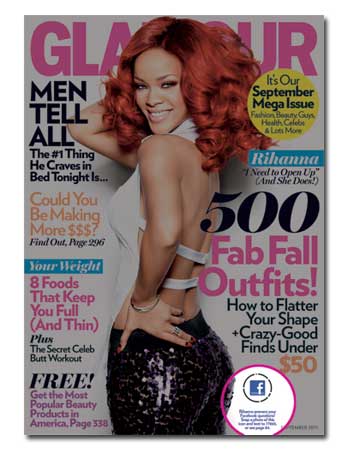 Conde Nast’s Glamour magazine rolled the dice when implementing the new Social SnapTag technology in a recent mobile advertising campaign this past September, but the title walked away more popular than before: the publication generated over 500,000 impressions from the program and increased their number of Facebook fans by 50,000.

"If you went through the issue you could like both editorial content and advertising," says Jenny Bowman, creative services director for Glamour. "The idea was to drive as many likes as possible for advertisers. If you hovered your phone over a Lancome ad and liked them with your phone, you could then be eligible to win a trip or eye-make up for a year–the consumer would always get something back. We had 45 tags in the magazine, including on the cover."

A Social SnapTag is similar to a QR code but mobile users do not need a QR scanner or smartphone to interact. The feature redirected users to sweepstakes entries, exclusive celebrity interviews and invitations to Glamour sponsored events, if they liked the publication or brand, among other things. In total, there were 25 advertisers involved in the program and the publication hosted 20 editorial tags for a total of 45.

"It stirred interest and created a social story throughout the magazine," says Bowman. "There were a little over 500,000 snaps and shares-you could snap something to like it and then share it with your friends on your Facebook wall. We had 250,000 snaps throughout the magazine, which includes editorial and advertising. Of those people of snapped a high percentage also shared the content on Facebook, which is how we totaled the number. What makes those numbers so great is that unlike a sweepstake, where you can enter as many times as you want, you can only like something once and liking and sharing shows real engagement."

About 67 percent of those who snapped or scanned a Social SnapTag also liked the magazine or the brand-that number represents about 4 percent of Glamour‘s circulation. According to the Audit Bureau of Circulation’s most recent Fas-Fax numbers, Glamour‘s total paid, verified and analyzed non-paid circulation sits at around 2.3 million.

"What was great about the SnapTag and the Facebook emphasis is it looked like the blue Facebook square and the circle around it is coded," says Bowman. "It was like a scavenger hunt where readers would look for the logo throughout the issue and it was distinct. Not only could you download it and scan it, but if you didn’t have a smartphone you could take a picture of it and text it. We wanted it to work with as many phones as possible."

In March, Glamour will roll out with a "Friends and Fans 2.0" campaign where users will have the ability to like brands and purchase goods directly from the magazine with their cell phones.

"We’ll have a completely shopable issue," says Bowman. "Readers can buy the product and if they click on a like button they’ll get free shipping or a special incentive."