Gawker Upgrades Its Kinja Commenting System
Users can now create a home page, blog and share content across the network. 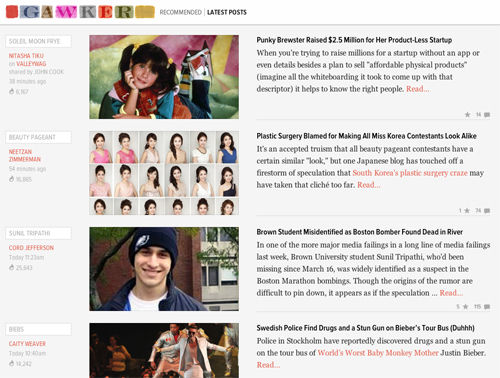 Gawker Media rolled out its redesigned platform this week across all of its verticals, which include Gawker, Jezebel, Deadspin and a just re-introduced, Silicon Valley-focused Valleywag. Along with all this is a significant upgrade to Gawker’s homegrown commenting platform Kinja, which has been tweaked to surface more constructive content and “banish” pointless or excessively harsh commenters.

Kinja originally launched in December of 2012.  “To paraphrase Nick [Denton, founder and CEO of Gawker Media], it was developed to solve the tragedy of comments that can be a toxic and poisonous section of a news site or blog,” says Lauren Bertolini, community development manager

It is difficult to argue that Internet trolls have become an endemic problem for publishers looking to create quality conversations that engage serious readers. And while Bertolini doesn’t believe there is a way to rid the Web of trolls, she does believe there are better ways to control the conversations of Gawker’s approximately 20 million monthly site visitors. “If you give people the tools to engage and promote a discussion then hopefully they will utilize it,” Bertolini says.

Social Media is in Kinja’s DNA, but its built around news content, thus making it a unique product. Registered users can create a homepage where they can post blogs, share content from users and editors and store comments posted on any of the Gawker Media sites. Users can also follow writers, other users and integrate social media platforms like Facebook and Twitter into their homepage. Editors from each vertical will have the same tools available and are expected to be active members of the community. This incentivizes both the reader and the writer to participate in a manner that keeps the conversation moving forward.

“The revamped commenting system debuting today will refine and sharpen that heckling, and make it more likely, we hope, that informed sources and subjects will bring their voices to bear on our stories, unmediated and of their own volition,” explains Gawker editor-in-chief John Cook in a post about the new platform. “It banishes untrusted or new sources to the outer reaches in a ‘pending queue,’ while privileging and highlighting threads started by readers that have been found useful in the past.”

Bertonlini adds that while Gawker is primarily a news-producing operation, the ability for readers to contribute to the content by having a conversation around it is important.

“We produce news and that’s what our foundation is. We understand the tools that you need to create content and we wanted a platform that was simple and easy to use that can build a rich story and conversation. We are giving people control of the conversation,” she says.

Social blogging is not a new concept, but Kinja is unique in that it merges professional and amateur content into one space.

This of course raises provocative questions about crowdsourcing content: How could this impact professional journalists? Will readers ultimately take control of content? Bertolini says that is not a concern for the company: “Our content is still edited by John Cook or our other editors and they will always decide what gets posted. The editors are still in control. But we have hired people out of comments.”