How Magazines Can Avoid Disaster by Coming Back to Earth
Instead of being something they're not, magazines should remember what they have: vertical audiences, trust and most of all, talent. 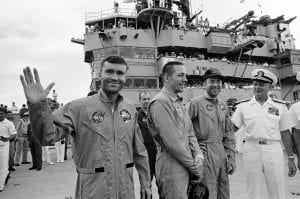 The Apollo 13 crew onboard the USS Iwo Jima after splashdown in the South Pacific Ocean.

You will be familiar, I suppose, with Apollo 13—if not the phenomenal movie, perhaps the unfortunate outer-space incident that inspired it. Seriously. It was in all the papers.

An oxygen tank explosion in the command module forced the astronauts to take refuge in the lunar lander, but their stubborn insistence on breathing quickly filled the small spacecraft with poisonous, exhaled CO2, and it needed to be scrubbed from cabin’s atmosphere. That could be accomplished with onboard canisters of lithium hydroxide, but the canisters from the command module had square openings and the ports to the lunar module’s filtration system were cylindrical.

In the movie, you may also recall a scene at the Johnson Space Center in Houston, during which the flight director emptied the contents of a cardboard box on a table surrounded by engineers. They were told that these were the components aboard the craft available for repurposing. And the engineers were told to use them to fit a square peg into a round hole.

All of this comes to mind thanks to a recent column in this very publication by the unfailingly sensible and well-informed Steve Smith, who has been following the media business since approximately the John Quincy Adams administration and has been eyewitness to strategic blunders of every kind in every medium. (Steve once told Samuel Morse, “Ampersands and asterisks are nice, but have you considered dots and dashes?”) He’s astute.

Performing another survey of audience behavior and platform success, Steve’s thoughtful advice for magazines was—if I may attempt to distill it—“Stop trying to be your competitor media, like cable. Be you.”

Like Polonius to Laertes: to thine own self be true.

Okay, granted, thine own self has some significant challenges facing it. It’s a whole industry saying, “Houston, we have a problem.” But Steve is correct that salvation doesn’t lie in trying to turn the crippled spacecraft into, I don’t know, Uber. No, siree. Salvation, if it lies anywhere, is in that cardboard box.

What do magazines have at hand that can be configured into a functioning business?

Yeah, Apollo 13 got back to Earth on the strength of resourceful minds making the most of duct tape and tube socks. But that never would have been necessary had NASA paid more attention to the oxygen.