More people interact with business newspaper The Financial Times through social media than directly with the brand, according to a recent infographic released by the publication.

In late July, The Financial Times’ digital subscribers grew to about 300,000 paying readers, an increase of about 31 percent when compared to the same time in 2011, with the publication’s total circulation increasing to almost 600,000.

Meanwhile, the FT social community reaches 3.9 million people—2.2 million on Twitter, 1.3 million on Google+, 430,000 on Facebook and a surprising 18,000 on LinkedIn. To put this into perspective, there are about 500 percent more people interacting with the brand on social media than there are paying for its content. 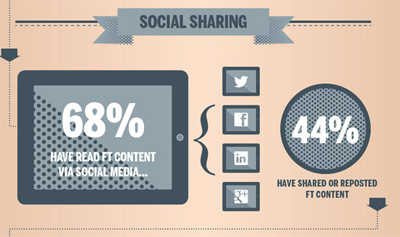 News, analysis and opinion pieces are what FT readers want from the brand on social media, although when on Facebook, these consumers also like to see offers or competitions.

According to the FT, about 20 percent of its traffic in the last six months came from social media, a medium that “is growing faster than every other traffic source at FT.com. The volume of visits to FT.com driven by social media is at the highest level ever.”

What do these numbers mean? According to a recent report from the Pew Research Center’s Internet and American Life Project, 66 percent of online adults use Facebook; 20 percent uses LinkedIn and 16 percent use Twitter. About 83 percent of adults aged 18-29 use Facebook, with the second highest group being 30-49-year-olds at 72 percent.

FT readers are on average 41 years old. However, based on the data from Pew, the majority of its social audience is likely a younger demographic than its typical subscriber (digital or otherwise)—a group that is not only coveted for advertisers, but likely enticing for its future growth. Young adults are less likely to pay for content, though they’re more likely to share it.

The puzzle for The Financial Times to solve will be the conversion of their young social media followers into paying subscribers.